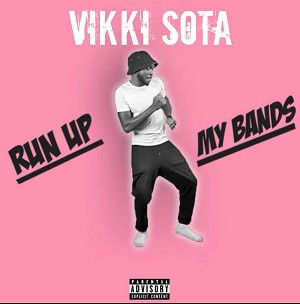 Conceptually speaking, there’s really nothing elaborate about what Chukwudi Victor Otubelu is producing in the new single “Run Up My Bands.” From top to bottom, this is the kind of trap song that speaks to formulaic standards in the genre today more than it does the rebelliousness of its critically acclaimed past, but within that decision to stick to the basic, I think Sota finds an interesting platform from which to reach a larger audience in this release.

There’s never an instance in his performance here where he sounds anything but on his game – his lyrics are lean, his delivery is mean, and his general grasp of emotion through little more than his vocal leaves us wondering if he needs any sort of a beat at all to tell us a story. Essentially, this is a rapper who is making vocal showmanship the center of our attention in his new single as opposed to the virtuosity of his studio skills or even the catchiness of a specific hook, and if you love a sweet surprise when you’re listening to the stereo, “Run Up My Bands” just might be packing exactly what you needed this November.

Basslines, drums, vocals, synths, samples – in this single, it all comes down to one thing and one thing alone, and that’s execution. The spot-on precision that Vikki Sota brings to the table in this piece is probably the most exciting part about “Run Up My Bands” from a fan perspective, but as a critic, it suggests a creative viability that could be molded a lot of different ways depending on the kind of direction the artist wants to go in moving forward.

The structure of this song is entirely simpler than the status quo calls for, but I think this is the case because it can be. Considering the kind of ability that this man is working with, I don’t believe including a lot of fat in this track would have done him any favors (the opposite, in all actuality). Outside of his actual part in the booth, Sota’s mix here is another deal-maker in my book, as it equally spellbinds the audience and teases us with the possibilities of what might be sitting on his professional horizon. I haven’t heard the complete tracklist of the upcoming EP Genesis yet, but I’m hopeful it reflects the same ambitiousness this single does.

I only just found out about Vikki Sota a little while ago after he released his studio debut last year, but he’s off to the kind of campaign start with his career that I do not often see in this industry, no matter the genre in question. Rap is by far the most competitive and cutthroat game to be in right now, but I dig how relaxed my man is when he gets into the verses here; it’s like he’s only concerned for the story he’s building and nothing else. Attitude is so important when trying to ascend the ranks of any music scene, but in this player’s case, I think it’s going to be credited with elevating him out of the underground and into the mainstream well ahead of his rivals.