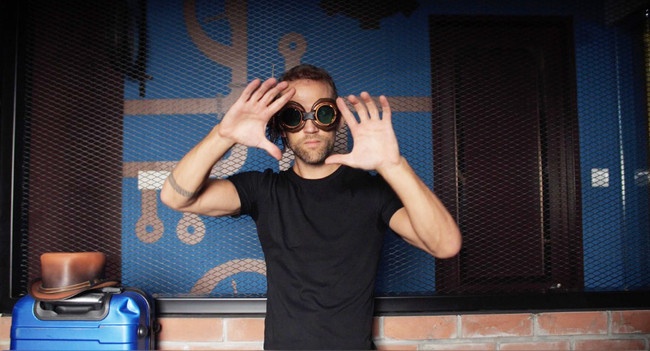 There’s nothing in the known universe that’s more psychedelic — or more terrifying — than time. Philosophers have theorized it, historians have recorded it, and millions have attempted to defy it. But nobody really understands it. It’s hard to look at a clock without feeling a little destabilized. Timepieces are a reminder that we’re all hurtling into the future at the same rate, at the mercy of a force we can’t begin to comprehend or control. There are clocks galore — gorgeous antique clocks — in Steve J. Allen’s spooky, lucid dream-like clip for “Other World,” his trippy new single, and they’re not just there for decoration. They are there to intrigue, unnerve, and immerse the viewer in the songs’ haunting, skewed, and curious perspective

Many fans of Allen’s music think of him as a punk rocker, and there’s good reason for that. Wreck The Place, his debut, was ferociously heady, intelligent, and bracing. It hardly lets up from its first roaring note to its last cymbal crash. His new album, Contrast, retains that intensity but varies its expression. It turns out that Allen is just as fierce and mesmerizing with an acoustic guitar in his hands as he is when he’s plugged in and turned up. “Other World,” co-written with Matt Hardouin from the band Fallan, is built on an acoustic six-string groove — one that only seems simple and unadorned until you examine it closely. There’s an undercurrent of menace in the song, a creeping feeling of psychological unrest, and the hiss of the sands in the hourglass running out. The narrator experiences some altered states, and they’re not altogether pleasant ones; still, he’s determined to report what he’s seen as accurately and bravely as he can.

Steve J. Allen is a proud product of the punk underground in his previous hometown of Sheffield, UK. But while he’s enlisted several members of that scene to support him on Contrast, for the “Other World” clip, he’s joined forces with the award-winning filmmaker Marwah Ghazi, in his current location in Southeast Asia who has outfitted his sonic hallucination with images that suit its powerful mood. Ghazi co-directs with Allen and another young man Aqib Malik in a shadow-shrouded room — one festooned with clocks, calendars, statues, and chalk-scribbled blackboard. Allen presents himself as a chronomancer, a mage riding the wave of time, and a storyteller, guiding a friend through a troubled reverie. Eventually, the shades are opened, and the light of day pours in, as the ghosts are dispelled.