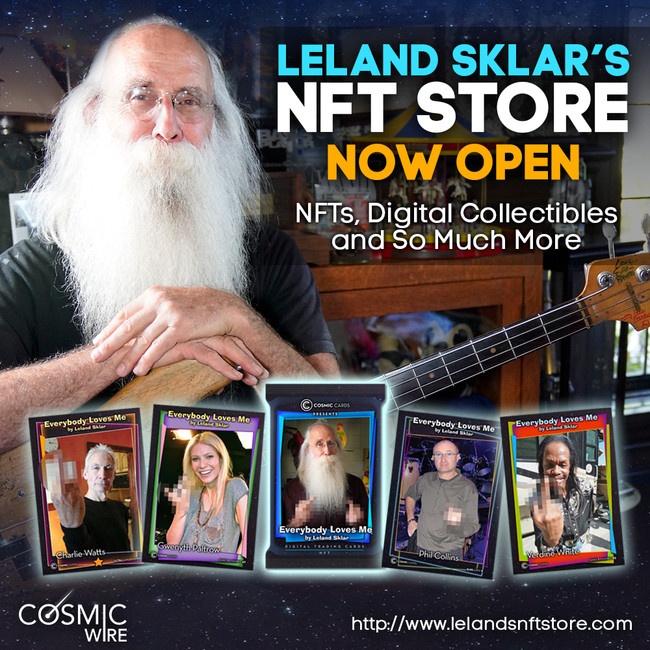 The Babe Ruth of bassists, Leland Sklar, credited on over 25,000 songs (200+ platinum records) with James Taylor, Ray Charles, Phil Collins, TOTO, Carole King, George Strait, Crosby, Nash & Young and scores more, shares pieces of history in his NFT store, constructed by Cosmic Wire.
Leland’s first NFTs will be a limited, one-time-only set of digital collectible cards based on his best-selling coffee table masterpiece, Everybody Loves Me, full of celebrities flipping Sklar the bird.
Leland Sklar’s NFTs or Cosmic Cards surface in collaboration with the legendary Hollywood Art Director, David Pascal (The Big Lebowski, Breaking Bad, Back To The Future, Seinfeld) and Cosmic Wire’s team of blockchain executives.  Select card packs are loaded with rewards such as the ability to 3D print Leland’s custom Frankenstein bass, a meet and greet, a signed copy of Everybody Loves Me, cameos and stories from his time spent with Sean Penn, FLEA, Phil Collins, Lyle Lovett, James Taylor and more.  A percentage of proceeds will be donated to LET ME HELP, a foundation supporting cancer research and development, anti-bullying and COVID-relief.
Beyond minting his legacy with NFTs, Leland is running a viral YouTube channel, entertaining the globe by reliving his unreal live performances, timeless records and sharing anecdotes behind the music.
Meanwhile Leland’s all-star band, The Immediate Family, made up of Danny Kortchmar (Neil Young), Waddy Wachtel (Stevie Nicks), Russ Kunkel (Bob Dylan) and Steve Postell (Eric Clapton) recently released their self titled album via Quarto Valley Records and are planning shows for November.
Leland Sklar – Other Links
YouTube:  https://www.youtube.com/watch?v=IJZUKhdWyEw
Website: https://www.lelandsnft.com/notify
Facebook: https://www.facebook.com/LelandSklarOfficial
Instagram: https://www.instagram.com/leland.sklar
Tha Bet One – Top online Live casino