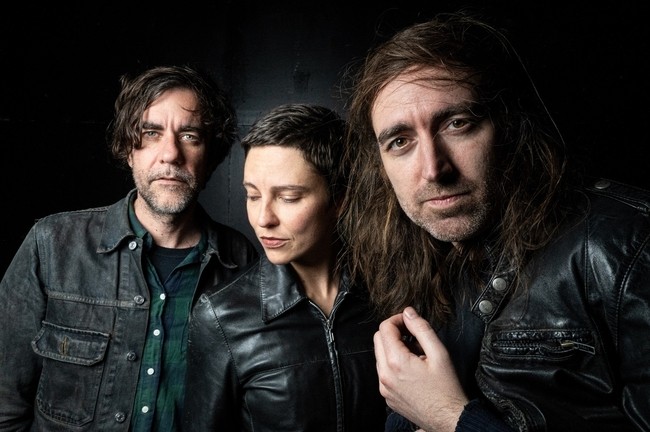 Fans all over the globe know: Oliver Ackermann always brings surprises. The singer and guitarist of New York City’s A Place To Bury Strangers has been delighting and astonishing his audience for close to two decades, combining post-punk, noise-rock, shoegaze, psychedelia, and avant-garde music in startling and unexpected ways. As the founder of Death By Audio, creator of signal-scrambling stomp boxes and visionary instrument effects, he’s exported that excitement and invention to other artists who plug into his gear and blow minds. In concert, A Place To Bury Strangers is nothing short of astounding — a shamanistic experience that bathes listeners in glorious sound, crazed left turns, transcendent vibrations, real-time experiments, brilliant breakthroughs.

And just as many of his peers in the New York City underground seem to be slowing down and settling in, Ackermann’s creativity is accelerating. He’s launched a label of his own: Dedstrange, dedicated to advancing the work of sonic renegades worldwide. He’s also refreshed the group’s lineup, adding bassist John Fedowitz and drummer Sandra Fedowitz, and the band has never sounded more current, or more courageous, or more accessibly melodic. The Hologram EP is the first release from the new lineup — and the first on Dedstrange — and it’s no overstatement to say that the reaction has been ecstatic. Ghettoblaster wrote that the band’s racket outpaced everything to emerge from New York City in the past decade. Brooklyn Vegan praised Ackermann’s “terrific, emotive” singing, and lauded the group’s recent commitment to foregrounding its melodies and lyrics. Pitchfork, Flood, AllMusic: they’ve all lined up to call Hologram an example of the best work of a tireless band with a deep discography and an unquenchable drive to create challenging, unprecedented music.

As noisy as they can be, there’s true prettiness in the APTBS sound. Sometimes it’s buried in the hypnotic mixes, and sometimes, it’s right there on the surface. “Playing The Part” is one of the most winsome things the group has ever recorded — it’s got a glorious guitar tone, an active, melodic bass line, and a graceful vocal from Ackermann that could legitimately be called sweet. Director Heather Bickford has matched the song with a video that underscores its beauty, and its strangeness, too. Bickford, who also stars in the clip, shoots Ackermann in a historic house in Flagstaff, Arizona that looks like something out of a reverie: there’s antique wallpaper, stained glass windows, curio cabinets stuffed with bone china, landscape paintings in gilded frames, and velvet drapes over the bed. Microphone in hand, thoroughly bewitched, animated by the enchantment of his surroundings, Ackermann slips into a dream.