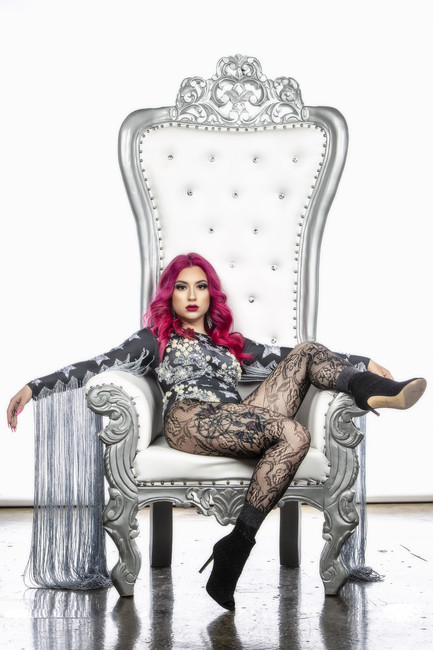 Rappers are pugilists. Some of them are kind-hearted, some are diplomatic, and many are optimistic. But if you aren’t combative at all — if you’re reluctant to get in the ring and slug it out, face to face with your demons — rhyming probably isn’t for you. Boxing is a recurring metaphor in hip-hop videos for a reason: under the lights and in the midst of the fight, it’s just you, your wits and skills, and the punch you pack. At first glance, Mischa might not look combative. The minute she starts to rap, though, she leaves no doubt about her ferocity, her tenacity, her fleetness, and the quickness of her thinking. In the boxing-themed video for “G2G,” she’s on the ropes – until she isn’t. When she breaks free, there’s hell to pay. She looks so natural and so comfortable in the ring that it’s almost immaterial that she’s wearing a pink floor-length skirt.

Another thing you’ll find in a boxing ring: big, chunky, wonderfully tactile capacitor microphones. Boxing mics are made for shouting; they’re designed to amplify big voices and broadcast big ideas. They can take a beating, and Mischa isn’t going to let a microphone like that go untouched. She has rhymes to spare and plenty to say — and a kiss-off like “G2G” requires an aggressive delivery. The song could be addressed to a partner who simply isn’t cutting it, or it could just as easily be an accusation leveled at slower, less talented (presumably male) vocalists who won’t get out of Mischa’s way. “G2G” is the latest in a flurry of releases by the Canadian rapper, including the sassy “Woke Up,” a collaboration with fellow Ottawa singer-songwriter Baëbe Ruth; the dangerously cool “Cruise Control”; and “Alpha Barbie,” a statement of purpose and mission from an emcee whose time has come.

The “G2G” clip is a dramatization of that breakthrough. Mischa begins the video at a disadvantage that few boxers ever face — both of her wrists are shackled to the ropes. Still, she rhymes with such command and such snarling intensity that it’s pretty clear she won’t be tethered for long. The rapper breaks her restraints and goes toe to toe with her opponent: a behemoth in a grotesque mask. He represents the doubters, the disbelievers, the chauvinists, and everything else that’s assailed her and kept her from reaching her potential, and soon enough, he’s prone on the mat.