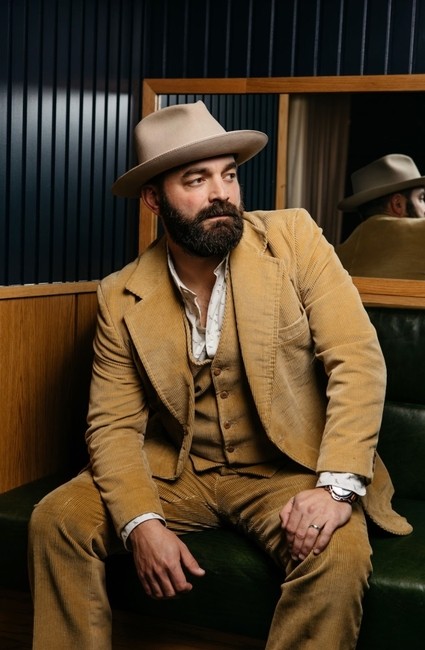 Like so many other great annual events, the Moon River Music Festival didn’t happen in 2020. But it’s back in Chattanooga in September ’21, it’s sold out, and Drew Holcomb – its tirelessly enthusiastic creator, organizer, and folk-rock true believer – will be taking center stage. We could tell you that Holcomb is pumped up and ready to go, but if you know Holcomb’s music and personality at all, that’s not necessary. Few artists approach performance with more joy, optimism, and camaraderie than he does.

And while he’s surely too modest and congenial to say so himself, that appearance under the lights at Moon River will be a genuine victory lap for Holcomb. Dragons, his 2019 full-length, featured Holcomb at his best, his most rambunctious, most empathetic and compassionate, and most expansive, and music listeners responded accordingly. The pandemic made it hard for Holcomb, his band, and his collaborators to celebrate their achievement properly. Those lucky enough to score a ticket can expect a party thunderous enough to shake Southern Tennessee – and they can expect the ecstatic “Family” to be in a prominent place on the setlist.

When Drew Holcomb sings about family, it’s not just his own clan that he’s talking about. He’s also recognizing his talented band, the Neighbors, the many collaborators and musical fellow travelers who assisted in creating Dragons, and the thousands upon thousands of devoted fans who crowd into his live concerts. Even through the pandemic, that audience has grown explosively, and the word keeps traveling about the good vibes that Holcomb and his band can generate. Call them a balm for tough times, a warm sonic hug, a reason for dancing on days when reasons can be tough to find.

An endearing Holcomb himself dances barefoot in the “Family” clip — first by himself, then with his wife Ellie Holcomb, familiar to followers for her work with the Neighbors, and, finally, with his three young children. But as fans know, everybody who hears Drew Holcomb wants to get in on the fun, and soon, his larger musical clan is dancing and singing along, too. Roots artists Natalie Hemby and Lori McKenna, both of whom contributed songwriting to Dragons, make appearances, as do CCM legend Amy Grant and country cornerstone Vince Gill. Like-minded bands join the party, too: Judah & The Lion, Darlingside, Mat Kearney, The War And Treaty, Ben Rector, NEEDTOBREATHE, Penny And Sparrow, The Secret Sisters, many others. They’re all here to celebrate togetherness and reaffirm their love for folk-rock and Holcomb’s work. It’s a community singing and playing together — and if you find yourself joining in, don’t be surprised.