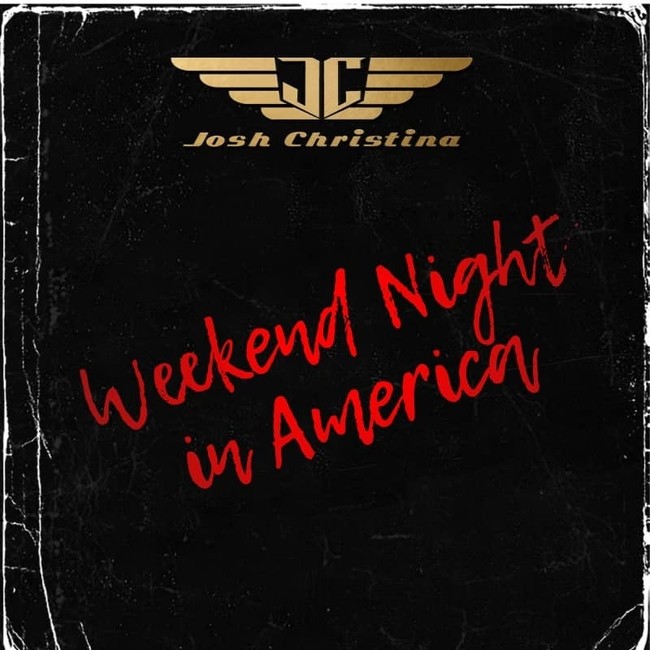 Josh Christina’s “Weekend Night In America” features a sassy, acoustic piano backing that offers a wonderful throwback to a time when piano men regularly had piano-based singles on the pop charts. Two of the most famous ones were Billy Joel and Elton John. The piano playing on Christina’s new song sounds more like John’s early work because it’s brash and stylish. It simply drives the song and refuses to be ignored.

However, lyrically this song harkens back to Joel’s approach – particularly his song “Piano Man.” Whereas Joel sang about the losers he’d regularly see when playing at a piano bar, Christina begins his song by highlighting various ambitious celebrants. However, this song is not about fulfilling ambitions. Instead, it’s all about partying on the weekend, all night long. He describes these partiers staying up “till the sun comes out.”

Some of the people in this song sure sound like Christina’s kind of people, too. One couple, for example enjoys hitting the karaoke bars together. When he gets to the chorus, Christina also slips a little patriotism into his lyric when he describes this weekend behavior as something truly American, as it takes place in “the land of the free.”

Another couple in the song is comprised of two women who want “to be each other’s girl.” For them, these weekend outings are ways of escaping those that disapprove of their lifestyle. They’re keeping this relationship a secret from their families, and if their folks found out, Christina suggests, this would put their lives “in a whirl.” For this pair at least, weekend nights are occasions to express their sexual freedoms.

Although piano is the song’s primary instrumental driver, the track also features a shuffling drum rhythm that carries with it a New Orleans music vibe. The song also has continuous electric guitar in its mix.

Christina mentions how — although people come from diverse backgrounds — they all have the same goal of having a good time. Another character in this song sounds to be more like one of Joel’s “Piano Man” folks, though. He’s a man that tries every weekend to “get lucky,” but only ends up acting like a fool. Therefore, weekend nights likely begin with a lot of promise, and then end up only in frustration. There are people out there like this guy, though. He’s acting as though the era of free love never ended. His behavior certainly doesn’t jibe well with the whole ‘me too’ movement of the moment. Then again, there are also probably women that act the exact same way. Christina is populating his song with many of the types of people seeking pleasure on the weekends, and some of these individuals fall into the desperately single category, unfortunately.

“Weekend Night In America” is a boisterous celebration in song. It’s easy to imagine Josh Christina kicking off his concerts with this song. After all, with his music he’s a bit of a weekend night party starter. During the song’s chorus, Christina reminds listeners to not worry about their situations. Instead, he encourages all within earshot to have a good time. After all, the weekend is the reward for a week of hard work, so Christian wants everybody to just enjoy themselves once