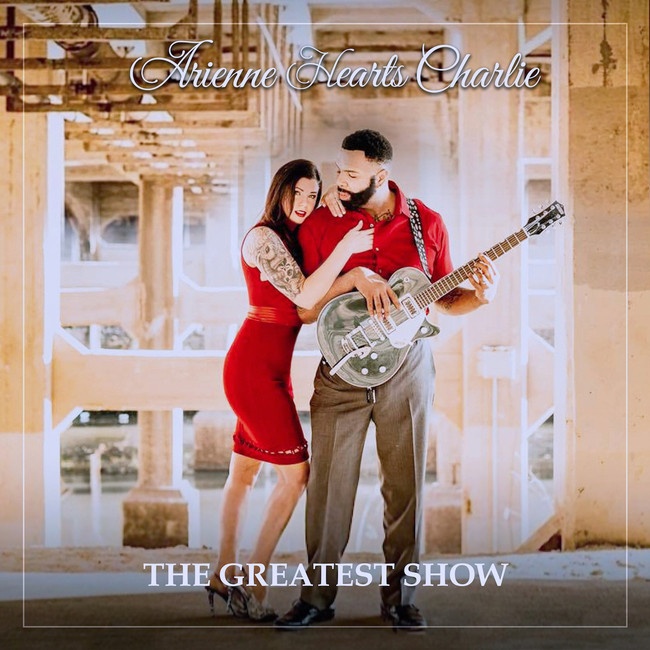 Arienne Hearts Charlie are releasing their debut album this month — and what a divine debut it is. Having only released a sprinkle of singles this year, this duo is going from strength to strength as they expand their ever-evolving discography. Their upcoming album ‘The Greatest Show’ speaks on their romcom-esque love story, seriously it’s the kind you’d find in a 2000s film. Having lived less than a mere block away from each other, the two lived in completely different worlds. By chance they met and, instantly, their worlds collided. In fact, that’s how they got their name ‘Arienne hearts Charlie.’ Because, yes, Arienne does indeed ‘heart’ Charlie.

‘The Greatest Show’ kicks off with ‘Voyeur’. Having been released a single earlier this year, ‘Voyeur’ has already racked up nearly 20,000 streams — and it’s not hard to hear why. Charlie’s tender tone introduces us to the smooth sound world that the duo sculpts. Married perfectly with Arienne’s powerful vocal presence, the two vocalists blend with an effortless intimacy. ‘Loving Day’ showcases Charlie’s intricate guitar skills. With subtle slides and gentle grace notes, Charlie lays a slick soundscape for Arienne’s vibrant vocal line to sail over. This tender track is a tribute to Mildred and Richard Loving, whose love broke barriers for generations to come. Through the stunning storytelling swimming within soft string lines and gentle brass, Arienne hearts Charlie have honoured them beautifully. ‘Bare’ is another stellar standout. The duo relaxes into the jazz realms, which they sound as if they were made for. They intricately weave within one another’s refrains, how naturally they compliment each other makes for fascinating listening. The album is concluded with stripped back versions of ‘Voyeur,’ ‘Bare’ and ‘Solitude.’ This is a captivating conclusion for such a well-rounded album as Arienne hearts Charlie showcase the incredible intimate side to their artistry. Arienne’s vocals almost float over the guitar foundations of each acoustic track. ‘The Greatest Show’ is an immensely impressive debut from the pair, and whilst it may describe the duo’s own love story, it’s of no doubt we’ll be falling in love with Arienne hearts Charlie when it drops on the 17th of this month.

‘The Greatest Show’ Will Be Released 17th of September on SPOTIFY