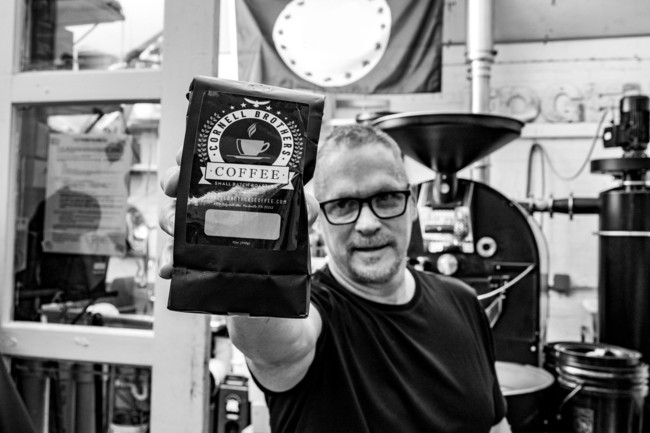 Entrepreneur and singer-songwriter Peter Cornell (Inflatable Soule, Black Market Radio) has always had a passion for three of life’s greatest treasures – family, music, and a really good cup of coffee. Recently opening Cornell Brothers Coffee Espresso Bar in the heart of Historic Downtown Nolensville, TN, he has announced that he is now sharing all three of his loves with the world as he debuts his premier line, Cornell Brothers Coffee: Small Batch Roasters and merchandise, via the web site cornellbrotherscoffee.com

Available for international shipping, coffee aficionados worldwide are now able to purchase fresh-roasted Cornell coffee online, including his three new varieties. According to Cornell, “We roast each week and ship on Thursdays. If we don’t have your order by Monday night, we will hold it until the following week so your product is of the highest quality we can provide.”

The company, according to Cornell, was named in memory of his late Grandfather and three uncles, all of whom were very influential in his life.

“Cornell Brothers Coffee is an homage to my granddad, Ralph T. Cornell, who was an enormous presence in my life growing up. Ralph T. and his three brothers – Emmersen, Harvey and Peter – left an indelible mark on me and were the driving force behind the decision to change my surname and carry on the Cornell legacy. The Cornell Brothers and the Cornell name always represented an old-worldliness, integrity, dignity and decorum.”

In fact, family is so important to Cornell that he says the very idea for Cornell Brothers Coffee stems from his Seattle upbringing, where he and his brothers and sisters practically “grew up with coffee in their veins.”

“My siblings and I first learned about coffee from our parents, who always brought home the latest technology in brewing. Heaven came to them in the form of a programmable coffee machine that would brew itself before they woke up in the morning. They took turns bringing each other coffee in bed; so we woke up to the smell of a fresh cup every morning,” he said. “In the late 80s and early 90s, espresso shops became a regular part of the Emerald City landscape and the espresso snob was born. Everyone had a regular spot and a regular espresso drink. My favorite haunt was a place called Uptown Espresso on lower Queen Anne Hill. My first ever espresso was an iced quad with the tiniest bit of soy milk. To this day, I never have my coffee any other way. And being that I’m an espresso drinker, I became very particular about the quality of my beans.”

“When I decided I wanted to launch my own brand of beans and an espresso bar, I knew I had to find the best roaster,” Cornell said. “Researching beans and roasting was my first step, and then I had the great fortune of meeting master roaster Lesa Wood right here in Nashville. Lesa is a pioneer and an innovator in the field of small batch roasting– a true artisan and a purist when it comes to perfecting her roasts –and has become a guiding beacon and mentor in this process. She is the Yoda of all things coffee.”

“Oh My Chives is proud to be teaming up with Cornell Brothers Coffee,” said Daly. “Together, our guests will be able to enjoy an expanded cafe menu along with small batch roasted coffee and espresso in our relaxed and friendly community atmosphere. It is a win for everyone!”

And because a portion of the proceeds from every bag of beans purchased online supports Second Harvest Food Bank Of Middle Tennessee, patrons can feel good knowing that they are directly supporting both a local business and a charity organization.

“It has always been important to me to give back and be of service; that lesson was ingrained in me from childhood,” said Cornell. “I knew that I wanted to partner with a local charity organization when I first conceptualized the business, and the work that Second Harvest does in our community and the greater Middle Tennessee area is second to none. They serve so many families in need, the elderly and those affected by disasters, whether natural or the recent pandemic. The number of children and families going hungry on a daily basis is staggering and unacceptable. Second Harvest DOES make a difference. They are truly remarkable.”

Nolensville is the first place since Seattle that Cornell says truly feels like home, which is why he’s excited to build a business and give back to his community in such a meaningful way. Prior to moving to TN, he spent the majority of his adult life crisscrossing the country performing in various musical projects, including his very first band Inflatable Soule, featuring his sisters Suzy (percussion/vocals) and Katy (flute/vocals), and managed by Susan Silver (Soundgarden, Alice in Chains).

Now, settled into TN life, Cornell has started writing and collaborating with other artists in addition to launching Cornell Brothers Coffee. His latest project was with multi-platinum rock band Candlebox. Cornell co-wrote the single “Let Me Down Easy” with frontman Kevin Martin for their forthcoming album Wolves (September 17, 2021).