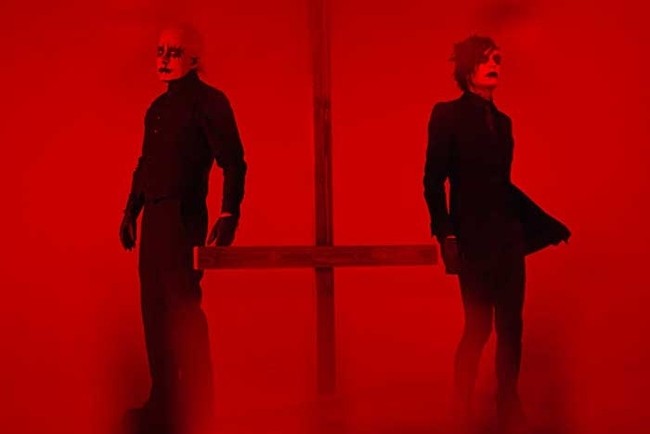 Résumés don’t tell you everything you need to know about sonic sorcerers, but sometimes, they’re pretty accurate guides. The two members of NOT MY GOD have been fusing hardcore industrial music and electronic pop for years — and their recent collaboration has amplified the diabolical intensity and frightening immediacy of the music they’re making. Fans of heavy music will recognize vocalist Tim Sköld for his extensive work with Marilyn Manson, KMFDM, and the Newlydeads, his production for Motionless in White, and his own self-titled industrial metal album SKOLD, which was released to ecstatic reviews. NOT MY GOD multi-instrumentalist Nero Bellum played synthesizer with SKOLD live; Tim Sköld contributed guitar to Psyclon Nine, Bellum’s unprecedented, innovative amalgam of darkwave, EBM, hellish techno, and black metal. In short, these are two masters of electronic evil we’re talking about, and their decision to join forces sent shivers of delight through the industrial underground.

Yet as wicked as their sound can be, it’s also effortlessly catchy. Bellum and Sköld certainly know how to bludgeon the listener, but they can also craft and bait a hook. “ASHES,” their latest single, builds on the aesthetic success of NOT MY GOD, the pair’s winter 2020 debut album. It’s a bloodstained tapestry of ominous synthesizer textures: destabilizing deep-bass wobbles, horror-movie piano plinks, oscillating, analog-sounding riffs, infernal machine noises, and blasts of white noise and steam-hiss. Sköld’s rasp is halfway between a threatening whisper and a strangled scream. Yet when he wants to, he can sing melodiously in a voice of eerie beauty. “The blackest of kingdoms lay open,” Sköld croons. He’s inviting you in — if you dare.

It’s hard to imagine a more sinister teaser for the upcoming album Simulacra than the “ASHES” clip. Sköld and Bellum, in full-face makeup, are drowned in lurid illumination. The frames of the clip are saturated in demonic reds and icy blues. Periodically, the footage blurs, snaps back in to focus, jumps ahead, stutters, repeats. It all suggests jittery heartbeats and the hallucinatory quality of a moment of pure horror. There’s a swinging upside-down cross, a fall of feathers, a bench for kneeling in cruel prayer. Yet, the most menacing shots in the “ASHES” clip are the ones of the musicians themselves. Sköld at the microphone is utterly possessed — driven to communicate pain, torment, and a kind of devilish excitement. Bellum, meanwhile, stands impassively at his synthesizer, twisting knobs like the maddest of scientists, dialing up distress signals designed to unnerve, discomfort, fascinate, and thrill.