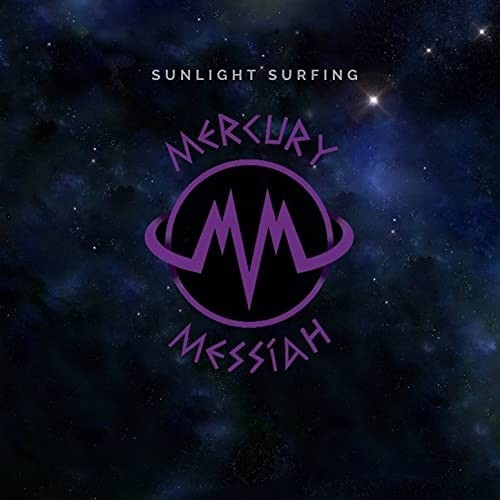 The first element that hits us after pressing the play button on “Sunlight Surfing” by Mercury Messiah is the gilded acoustic guitar strings and the surreal strumming that emits their melody. There’s retrospection here, but we’re not quite certain of what we’re looking back at until the lead vocal kicks in and instantly brings to mind a pastoral Robert Plant. The classic rock vibes are plentiful in “Sunlight Surfing,” and as the other components of a stirring harmony assume their positions in the arrangement here, Mercury Messiah’s brilliance becomes impossible for even the most rock-resistant of critics to deny.

Traditionally speaking, the identity of rock n’ roll has always been one defined by those who took the path less chosen, perhaps better described as the misfits and rebels in music who needed volume and virtuosity more than others to tell their stories. Ironically enough, this is an act utilizing the familiar to create a more flamboyant rock sound that’s built from the ground up in a song like their latest release; it’s guitar-focused and uncompromisingly raw, yet structured around a pop simplicity I haven’t heard enough of in the last couple of years.

As the crunch of the electric guitars finds its way into the mix, respect for the old guard in rock becomes less evident in the cosmetics of the harmony than it does the muscle of the music, and all without ever touching the volume knob. Mercury Messiah’s approach is what tethers so much of their aesthetical makeup to the legends of this genre, which isn’t to say that their balance of the melodies in “Sunlight Surfing” doesn’t recall the cut and dry forward-thinking of vintage rockers in their prime so much as it is to separate their sound from the throwbacks of the world.

I don’t hear a single synthetic part within this song, but instead just a lot of chest-pounding, emotional grooving that always centers on the sizzle of the guitar strings more than it does anything else. You could argue that the black and white qualities in this single are retro, but by and large, I think they’re also what give the song so much personality and heart.

Rock’s best players tend to come out of the underground slowly rather meteorically, and though the fight for the spotlight in a crowded underground can be rough, to say the least, I think that Mercury Messiah is going to benefit from taking methodical steps in their career as opposed to doing anything too extreme with the sound they’re showcasing in “Sunlight Surfing.” There’s a moderate fragility to the harmonies here that I don’t want them changing just for the sake of getting brawnier in another single, and truth be told I think they’re going to be one of the main reasons so many people get into this track over the coming autumn season.

In examining the way this was constructed, I do not see “Sunlight Surfing” being Mercury Messiah’s last undisputedly ambitious work to hit the underground beat.