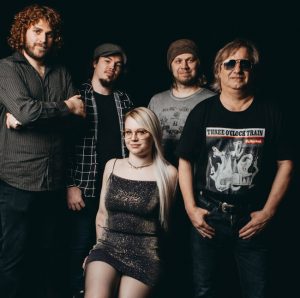 Old fashioned rock n’ roll music never truly goes out of style, and though Wave 21 are incorporating a touch of modernity to their sound, I don’t think it can be said that their new album Brace Yourself would be possible without a little bit of retrospection. In this record’s ten songs, we find elements of the rockabilly, classic rock, and country-rock crossover sounds ala Bakersfield that have come to define the foundations of the genre at its most pure and untainted. Simply put, starting with “Why Does It Happen” and moving through this tracklist will leave you wondering why Wave 21 have been as isolated to the Canadian market as they have.

These vocals are the bread and butter of “The White Wings of an Angel,” “Dreams,” “Whenever You’re Near” and “Way Far Back,” and I think that they’re considerably prettier in this raw state than they would have been with a lot of external varnish added into the mix. Though I liked the first album these guys cut together, there’s just something so much more satisfying about the unfiltered sound they’re working with in this performance, and it makes me all the more curious to hear what they sound like live.

“Way Far Back” is a terrific collaboration with Steve Hill, but “All Over & Over,” which brings in Sam Roberts Band for some fun, is probably my favorite song on this LP. It has a radio-ready sound that I did not hear the first time I listened to Wave 21 back in 2018, and it’s not entirely because of the swagger SRB is adding into the material. This group has grown up quite a bit in the last three years, and if they hadn’t I don’t think they’d be coming off as well-rounded in their chemistry as they are in this record.

The video for “Why Does It Happen” rightly keeps its imagery on the simple side, which allows for the music to be the spotlight-centering entity it really should be. There’s nothing worse than a band getting in the way of their success with a lot of undue decadence that is best kept on the sidelines in the first place, but Wave 21 don’t appear tempted by aesthetical excess. This is an efficient record that still rocks hard, which is something a lot of critics – and their favorite bands – would tell you just isn’t possible to make in 2021.

You can’t go wrong with Canadian talent as formidable as this, and if you haven’t already been spinning the music of Wave 21, this could be the right album to get you into their sound. From where I sit, the Great White North has never been as rich with indie skill as it is today, and it says something that Wave 21 stand out in the crowd as much as they do. They’ve got something no one else in their scene has, and it’s credibility. That credibility grants them the ability to experiment, and in Brace Yourself, evolve as a band and artistic influencers in general.