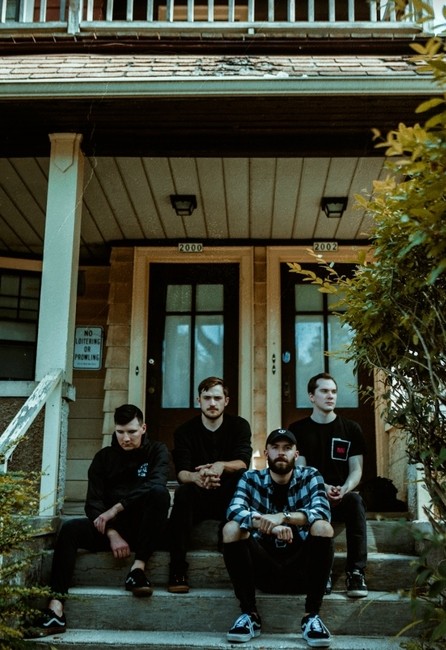 Every artist dreams of making it big in their hometown – but few can call themselves hometown heroes from the start. When Chicago quartet Wolf Rd celebrated the launch of their 2019 debut EP Nowhere Around You, it was with a sold-out show. The band continued to promote the release with music videos and a series of high-powered performances around Chicagoland, sharing the stage with national touring acts while making an immediate name for themselves and quickly becoming one of the city’s most beloved local bands.

Together, Chris Hoffmann (vocals), Nick Hoffmann (drums / additional instrumentation), Geoffrey Duckmann (guitar), and Devin Stone (bass) combine the anthemic melodies and passion of pop-punk with metal and hardcore instrumentation to create a sound that is unique and genre-inclusive. Think the harmonic vocals of All Time Low or State Champs mixed with the energy of Neck Deep and the raw emotion of fellow Chicago acts Knuckle Puck and Real Friends. From a basement to a local club to your headphones, Wolf Rd is here to give you cathartic songs tailor-made to scream your heart out to.

Wolf Rd’s single “As Good As It Gets,” from the Counterpoint EP released this spring, showcases a more delicate side of the band. In the vein of This Wild Life, the song – produced, engineered, mixed, and mastered by Roye Robley – features acoustic guitars and sweet harmonies – with a guest vocal appearance by Sylvia Mendez. Break-up songs don’t have to be nasty or violent to show the pain being experienced; Chris Hoffmann shares, “One thing that was really important to me was that I didn’t want this song to be one-sided. I’m far from perfect, and when things fall apart, both sides usually share some of the blame.”

The “As Good As It Gets” music video opens up on the aftermath of a birthday party. “Happy Birthday Bartley,” a banner proclaims; torn streamers and empty beer bottles are strewn about a backyard. The visuals act as a metaphor for the rollercoaster relationship depicted in the song – showing both sides, from sweet, intimate moments to heated arguments and a dramatic conclusion. But even once the action is all over, the memories – and the remnants of the party – remain to haunt you.