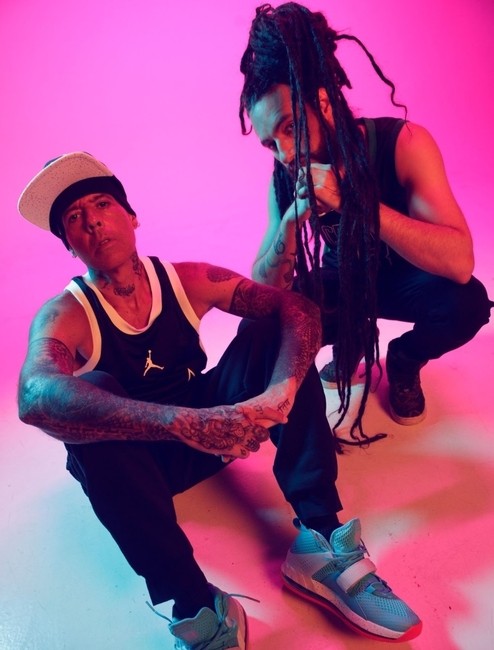 It was announced today that Monsieur Job has released their new album “Musica para mi Madre”. The inspiration for the record came from the long history of support, encouragement and wisdom imparted by the 82 year old Mother of founder and creative director of Monsieur Job, Toby Holguin. To hear him tell it, she has been a true guiding light for his life and career; his original appreciation of art and culture comes from her and other close family members, and this recording is a full throated tribute to that. The title is also one of dual meaning and purpose, as “Madre” could also mean “Madre Tierra”, or “Mother Earth”, and there is something growing under the surface – these songs are a lead into a theatrical circus presentation that is currently in production based on the sounds and themes of the music and storyline.

Influenced by artists like Miles Davis, Art Blakey, Bill Evans, Herbie Hancock, and many others in the jazz world, “Music para mi Madre” contains many choice cuts, some of which include the rollicking opener “Capri”, which calls to mind the reggaeton genre while also harkening to more traditional latin rhythms and melodies, the drum and bass meets jazzy horn vibe of “Backstabbers”, the darker, industrial inspired string arrangements of “Irony”, the reggae downtempo beat and wind instrument heavy “Soul Slurp”, the dramatic crescendo building dynamic “Rapsodia”, the old time sounds of dixieland made new in “Da Funk” and “Corre Caballito”, which was actually written by Toby’s mother when he was born, and now has been made into a truly moving ballad, completing the inherited musical circle of a mother and sons talent coming together.

Listen and you will find that these tunes are emotional, they are dynamic, with genre jumping melodies in funk, jazz, r&b and soul, mixed with sounds from the Middle East, Indian “Bollywood” music assisted by Bollywood Director Pritam, and Africa. “Musica para mi Madre” creates a movie in your head that keeps you interested in finding out what happens next. Toby Holguin and Monsieur Job want you to open your ears, get tangled in a dream, and lose yourself in the music!

Straight from Cali, Colombia, a beautiful place high in the mountains above the clouds, Monsieur Job began as a solo project for band founder Toby Holguin, as he released the critically acclaimed album “Bass Pa$$i”. Looking to stimulate collaboration, Toby then decided to form a band with a musician he knew to be top notch, Leo Jaramillo from Bogota, Colombia. Both artists create their own style of music, and combined, Toby and Leo are Monsieur Job – a band that will truly rock your soul and make you move your feet.

An eclectic and versatile musician in the Latin genre, Toby had the idea to start doing Urban Music besides the Chill Out and Electronic Music he had been creating, which is the vision that created the album “Bass Pa$$i”. Then Toby and Leo started dropping broken beats with a more festive, shaky, groovy Caribbean Latin flavor, turning the tunes into an international mash up of world talents in a unique blend of genres. There is also an electronic division called “EME JOTA BEATBANG” which features Toby alongside super DJ Charlie Illera. Toby and Charlie consistently spin records for top venues around the world.

On their debut release together, “Chow Chow Eyyy Pow Pow”, the record hit the Euro Indie Music Chart at #1 for 9 consecutive weeks as well as progressive singles; “Kick it” Remix feat. Charly Black, “Pica Pica”, Niña Shake Your Body” feat. No Mercy & Vojke Djans and “Chilliando Hangueando” feat. Cholo, and “La Melancolic Happy” feat. Clindistino reaching the #1 position as well, the Digital Radio Tracker Top 10, and Top 200 for Best Albums, #2 for the Billboard Latin Rhythm Albums Chart, and the Billboard Top 10 Heatseekers Albums Chart for their album “Bass Pa$$i”. This album was recorded in Bogota and Miami at Basswalk Studios, and Barba Studios in Belgrade and mastered at Sterling Studios, New York. Zona de Dropeo was recorded in Basswalk Studios in Cali and Bogotá.

Moreover, the next few Monsieur Job studio albums; “Zona de Dropeo” and “Revisited 2020” were released in late summer 2019 and included 15 consecutive charted singles, 11 in the Billboard Top 10 singles and 4 in the Top 20 such as; “A Escondidas”, “Kick it”, “Boogie..báilalo brincao”, “Pica Pica”, “Bájate las Bragas”, “Busque Mal”, “Muero por ti”, “Vos Sos”, “Me Contagié”, “No Voy A Querer”, “Tanto Tiempo Sin Verte”, “Cucaracha”, Gato por Liebre”, “Gucci Celine”, and “La Clave”. They also peaked on the Top 10 Billboard Annual Artists of 2020 for Digital Latin Sales. As for 2021, they have maintained their efforts with six Billboard hits in the Latin Digital Sales list so far this year.

Monsieur Job is managed and promoted by Basswalk Latino, Cali. For booking and availability contact Diego Rodriguez or Stephen Wrench.