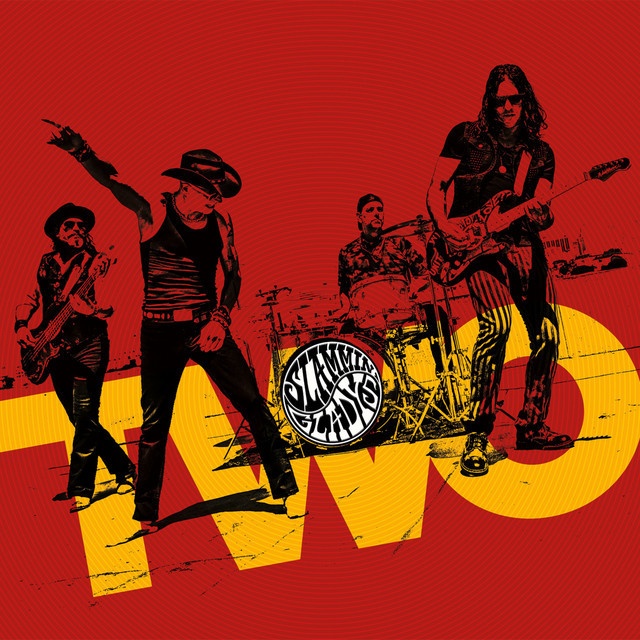 Not every band can rock a rooftop. It takes a certain combination of talent, guts, and faith in a message to mount a city building and rain sound down to the streets below. Famously, the Beatles did it in London. The Jefferson Airplane took to the roof of a hotel in New York and blared in defiance of the police; U2 may have had more authorization for their own rooftop show, but they were every bit as loud and bold. It’s in the spirit of those immortal bands that Slammin’ Gladys climbed to the top of a warehouse, plugged in, and filmed the results. There, under brilliant sunshine, with the skyline of Los Angeles in the background, the Southern Californian four-piece roars out “Hold Up My Blue Sky,” their latest exercise in blistering, uncompromising rock.

What makes them so sure that the town will appreciate it? For starters, there’s the chorus hook: it’s instantly appealing, totally memorable, and expertly designed by these rock and roll lifers to get you singing along. Then there’s the big beat, the scalding guitar solo, and the absolute conviction and naked emotion of lead singer David Brooks, who tells the story of a woman’s desperate search for a sustaining love. It’s a pivotal track on TWO, a second album that was twenty years in the making and one that has, since its February 2021 release, won ecstatic praise from hard rock fans and critics alike. Rock Times, Defenders of the Faith, Junkman Radio, Apocalypse Later, The Rock Pit: all of these outlets agree that the re-emergence of Slammin’ Gladys has been salutary for rock music and a much-needed reminder of the ferocity and fire of the classic era.

The group’s amalgam of blues, rock, and funk- meshed together on the infamous Sunset Strip of Los Angeles was designed to blow the roof off of a club. Many of their diehard fans will testify that as great as their recordings sound, their concerts are even better. The “Hold Up My Blue Sky” clip is a rooftop takeover and a celebration of summer – as the weather warms up and restrictions loosen, the country is getting back to normal and bands are getting back to playing live music. It’s also a portrait of a terrific live band and proof positive that the pandemic hasn’t dulled their edge one bit. The four members of Slammin’ Gladys transform that Los Angeles roof into the best rock theater imaginable, and one with a stunning view, too. If that isn’t enough, the band intersperse breathtaking aerial footage shot in Utah, Las Vegas, California (the Pacific Ocean makes an appearance!) while driving across the country among the shots of the band in action. It’s all a rush — a wonderfully wild ride from a bunch of veteran rockers who know how to reach for the sky and shake the earth.