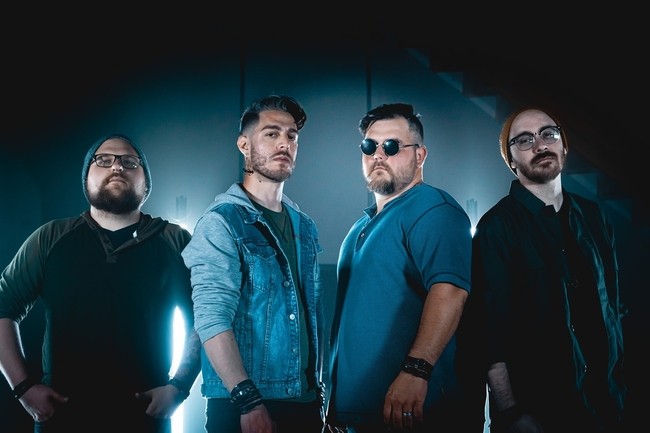 Now that the pandemic finally looks like it’s coming to an end, the band Huxley has some new music and a new sound. Lead Vocalist Doug Goldspiel took time out to answer some of Skope’s questions.

Skope: Your bio describes your new music as, “A revved up, albeit much more melodically-driven and musically-textured version of their past musical ventures.” What factors contributed to this evolution in your sound?

Doug Goldspiel: A lot of what drove our sound was our interest in growing up, musically. We realized that our collective tastes had become more suited for a radio rock sound, rather than metal core and felt we might sit better in that world. Linking up with our producer, Chris Kelly, helped us discover that sound as well. We had a pretty good idea of where we needed to be, it was just a matter of finding a way to put our spin on the rock we all loved.

Skope: Tell me more about your producer Chris Kelly. What were some of the specific changes he suggested to the band?

Goldspiel: The biggest adjustment for all of us was to simplify. We had typically written songs with lots of layers and technicality, but we needed to learn how to streamline that and make it more palatable for the typical listener. All of those parts are cool, but don’t always translate well when you’re trying to be on rock radio. Chris was instrumental in challenging us to rethink how we made songs and what we wanted to convey in each track.

Skope: How did you initially connect with Chris Kelly?

Goldspiel: We were searching for a producer just like him when we decided to switch over from metal core. Chris, who is a metal guitarist, seemed to get what we were trying to do with Huxley and what sort of sound we were looking to make. When Mike (lead guitarist) and I spoke with him originally to tell him our thoughts and what we hoped to accomplish, we knew immediately that he was our guy. A bit of research and a few conversations led us to the final piece to create Huxley.

Skope: What inspired the single “What Have I Done?”?

Goldspiel: The idea for the hook came to me one night, while Matt (bassist) and I were living together. I guilted him into working it out with me late that night and we brought it to the rest of the guys the next day. It wasn’t until later on, once we had a skeleton for the song and dove deeper into the writing process, that the topic of increasing cases of domestic violence finally gave the song its true meaning.

Goldspiel: As of right now, there’s no real label on what we plan to do. We have a bunch of songs in the works, as well as other completed songs. We had a chance to go out to Vegas and write a song with Kane Churko and came away with an awesome track! This just means the game plan, for now, is to give the world more Huxley as quickly as we can, regardless of what that means in terms of format.

Skope: Is there a message in your new music and, if so, what is that message?

Goldspiel: You are not alone.

Our latest music video directly addresses the dangers of domestic violence. During the pandemic, the number of domestic violence incidents sky rocketed. We found this to be immensely troubling and set out to do something about it. Although domestic violence, unfortunately, has been an issue for a long time, we hoped that this video could help us do one of three things:

We end our video with the line “You are not alone.” This is the most important message we felt we could put out.

Skope: Are you set on releasing EPs, as opposed to full-lengths, and, if so, what is the reasoning behind this strategy?

Goldspiel: Right now, we’re more concentrated on releasing singles. We like being able to accompany our songs with video content, merch, etc. and to give audiences something new, more frequently. We find holding off for an EP or full-length sometimes takes too long, so we hope to get more stuff out, more quickly, so there is more to love!

Skope: Who are some of your primary musical influences?

Goldspiel: I would say the band really looks to Shinedown and Breaking Benjamin as primary influences, with a laundry list of other rock bands from AC/DC to 3 Days Grace as other branching off points. Our goal is to give listeners a familiar, hard rock feel, with a modern active rock kick!

Skope: Is there a process to writing Huxley songs? If so, how do the band’s songs come together?

Goldspiel: Our writing process, since the pandemic, has gotten a little funky. Our songs, for the most part, are a collaborative effort. Everyone contributes his own ideas, which we, then, re-work and iron out with Chris. Once we all agree on the demo, we’ll go back and re-record the final product.

Skope: Is the band’s name inspired by the writer, Aldous Huxley, or something else?

Goldspiel: Most people don’t get that reference, so it is cool you picked it out, but the short answer is yes and no. Our old drummer, Robbie Masso, had made that reference to the writer after we thought of the name. He is a writer himself, so he immediately made the connection. The rest of us might have taken it from the street name we practiced on. We thought it was cool, and there was something about having an X in the name we all liked!