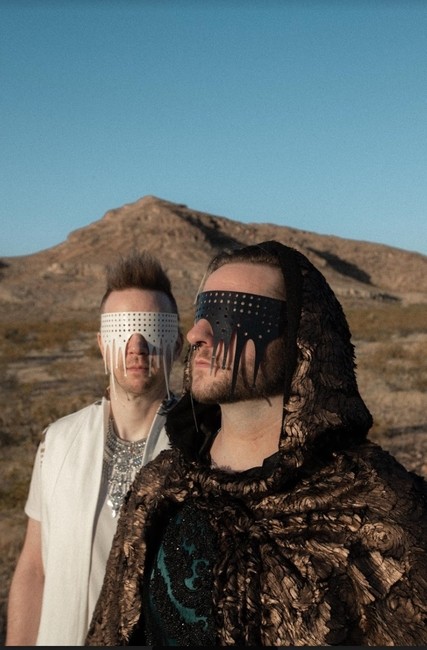 No matter how ephemeral they might sound on the radio or on a playlist, some pop confections are built to last. Blake Lewis and KJ Sawka know all about that: the two artists have always been adept at balancing audience demand with scrupulous attention to craft and detail. They’ve made plenty of crowd-pleasing pop, rock, and electronic music, but they’ve always demonstrated a deep awareness of musical history and the evergreen qualities of the best recordings. So it’s no surprise that their first release together as The Private Language is a cover of a certified classic: “Everybody Wants To Rule The World,” the 1985 chart-topper by the English new wave band Tears For Fears.

So when we tell you that Lewis and Sawka have made this song their own, we don’t mean to say that they don’t respect the original. Maybe it’s better to say that they understand the experimental intentions of Tears For Fears well enough to know that Curt Smith and Roland Orzabal would expect – if not demand! – a transformation. Their version is immediately recognizable but also boldly updated: an “Everybody Wants To Rule The World” that simultaneously acknowledges advances in electronic recording and the timelessness of a perfect melody.

Both Lewis and Sawka apply everything they’ve learned in their many other projects to the cover version. The directness and pure vocal charisma that helped guide Blake Lewis to the finals of the sixth season of American Idol are in evidence here, as is the attitude and sense of irony and perspective that distinguished A.D.D. (Audio Day Dream), his Top Ten full-length. As the drummer in the incomparable electronic group Pendulum – one of the seminal acts in drum n’ bass – KJ Sawka knows how to guide a complicated song down some twisting alleys, and that’s exactly what he does here. He’s collaborated with progressive-minded musicians from Amon Tobin to Andy Summers of the Police; his production with The Private Language leaves no doubt why he’s sought out so frequently.

Released right in the middle of the 1980s, “Everybody Wants To Rule The World” was a gentle but pointed statement about the rampant greed and ambition then prevalent. The last few years demonstrate that things haven’t changed as much as we’d like – and lines about tumbling walls and humanity turning its back on mother nature are, once again, all too timely. The clip for The Private Language’s version of the Tears For Fears classic is a whirlwind overview of the world as it is: conflict, destabilization, cries for justice, and looming ecological catastrophe. The musicians wear sunglasses that look like melting crowns. Rulership, they seem to imply, has turned to tears. We can still intervene, Lewis and Sawha suggest, if we want to. But how badly do we want to?