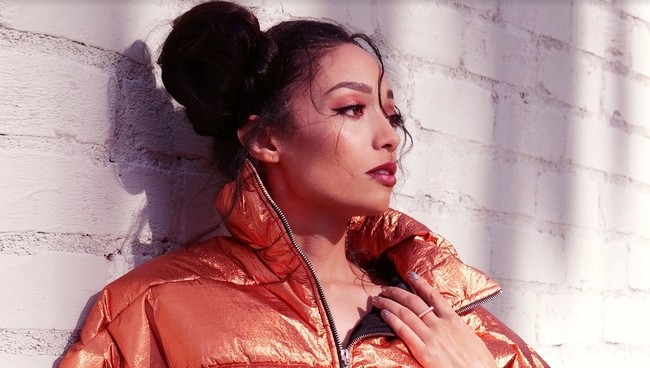 “Gotta make a move,” sings vocal house and soul artist Dovley on the chorus of “Be About It,” her newest single. She doesn’t sound particularly anxious about it or even urgent; she’s just resolute. She recognizes – as many of us do – that a worldwide period of repose is coming to an end. Months spent indoors haven’t been good for our dispositions or our collective outlook. No matter what we’ve been through, we’ve still got big dreams, and we still can be more than what we are. When Dovley arrives at the end of the verse and tells us to just “do it” (whatever it is), it feels like an incantation. It’s punctuation before the turn of a page – a sonic landmark, signifying the end of a time of retreat and the beginning of a time of re-engagement.

“Be About It” is many things. It’s a club burner: a homage to the great house-inflected pop of the ’90s, an enthusiastic call to the dance floor, a promise of parties to come. It’s a motivational record – one that encourages listeners to identify an aspiration, put aside excuses, and realize our goals. It’s a sign of spring, rebirth, renewed energy, and rediscovered hope. But above all, it’s a note-to-self. For Dovley, it is indeed time to make a move – from well-regarded house and dance singer to a genre-transcending artist who delivers messages that resonate for listeners of all kinds. “Ricochet” and “Everywhere,” her first two singles, have been streamed more than 700,000 times. They’ve established Dovley as a vocalist with a signature sound, a writer with a knack for memorable phrases, and a video performer with a unique sense of style. So “Be About It” – which she also produced – isn’t just a call to action. It is the action she’s singing about: it’s the vehicle for her ascendancy, the irresistible pulse wave announcing the birth of a star.

Her magnetic performance in the “Be About It” clip ought to silence any doubters. She combines a commanding screen presence with effortless glamour; best of all, she directed the clip herself, demonstrating filmmaking skills that equal her musical talents. Dovley shares the clip with an engaging cast of characters, each of whom is attempting to overcome shyness, social conditioning, and simple inertia. One wants to be a drummer. Another is learning to love herself even if she doesn’t look like society’s standard of beauty, finding the courage to talk to the cute guy who thinks she’s gorgeous just the way she is. One is a barista who loves to dance and finally gets the courage to pursue her passion. But the most appealing is a young wallflower who sits on the sidelines and doesn’t believe she can play basketball – until the rhythm reaches her, and she understands that she’s always had what it takes to compete. Her long-distance shot goes in. The message is clear: so can yours.