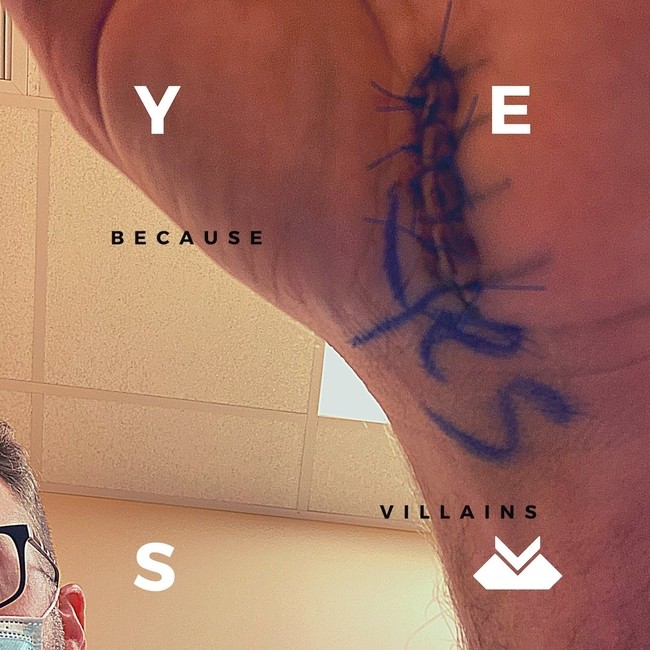 Because Villains is Travis James’ solo project, with Yes, his three-song EP. In fact, Travis wrote and recorded this release.

The release opens with one titled “The Feeling.” This recording kicks off with just some tasty guitar work and James’ breathy lead vocal. Lyrically, it finds Travis playing Monday morning quarterback, if you will, and looking into the review mirror to reflect upon the end of a relationship. He apologizes at one point and admits, “I was born to run.” He even paraphrases Pink Floy by singing about becoming comfortably numb. He beats himself up over his behavior, admitting to “chasing all of the time” and surviving (presumably emotional) “little heart attacks.” About a third of the way, James double tracks his lead vocal, as he continues to deeply question himself. He’s basically blaming himself for some of the things that have gone wrong in his past and – it seems – wondering if he might even need professional help to resolve these inner conflicts. In the end, he exclaims, “I want my feeling back,” which is where the song derives its title. Something happened to him that stole his feelings. Heartbreak can certainly do that to a man. A relationship where a heart is severely damaged, can cause a guy to go to great lengths to protect his heart so it never again gets that hurt that badly. Who wants to take a chance and love again, only to end up feeling horrible? At this point, this character’s motto may be, ‘It’s better not to have loved and lost, than to have never loved at all.’ This song is a little bit like the cry of a wounded animal.

The next entry, “Painkillers,” begins similarly, with just an acoustic guitar. This one continues the story begun with “The Feeling.” It starts off with James vowing not to ever want to hear the word “stupid” ever again. These painful memories find him reaching for prescription drugs. However, painkillers can only kill physical pain, and not soothe emotional damage. It differs from the opener, however, in that it features a relatively full band arrangement behind James’ vocal. It’s as though he’s looking for something to take himself away from himself, as though he was and is his own worst enemy. James is defiant, though, when he sings, “This is the last fight I won’t win.” Sometimes, getting the strength to fight for oneself is an unexpected benefit from being beaten down, whether that was by circumstances or another person.

Finally, “There is Us” begins with something not often heard – at least not this overtly – on the other tracks, which is pounding drums. Also, the guitar work is clearly more electric sounding than acoustic, as it sounds elsewhere. He declares how he doesn’t know what side he’s on in a conflict because no one is winning, and no one is losing. James’ vocal matches the aggressiveness of the instrumentation by sounding decidedly rough in and quivering places. He’s singing about a loveless relationship when he declares how ‘there is love,’ and then “there is us.” It’s a sad commentary on a previous relationship.

Travis James is unquestionably focused on the past and its impact on his life. One hopes these songs will help him get past his pain and move on.