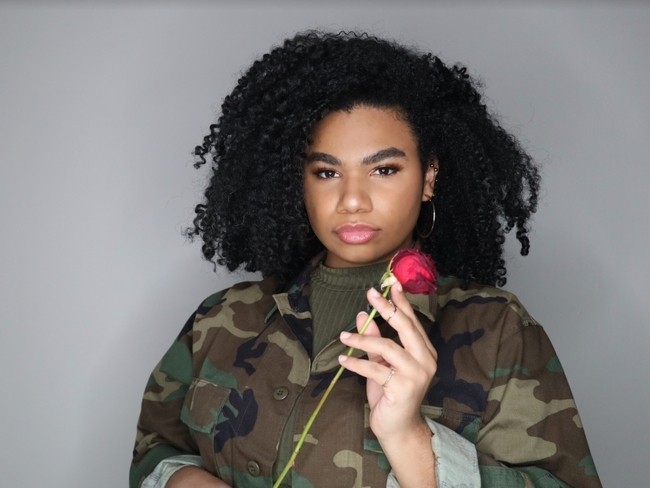 Wé McDonald is right at home in the spotlight – the 22 year old is a budding star with screen presence, charisma to burn, and a thousand-watt smile. A once-in-a-generation talent, she takes influence from Aretha and Whitney, bringing her audience back to an era of Hollywood movie glamour, but her style and presentation could be compared to Billie Eilish, a cool, confident, edgy tomboy. The innovative jazz vocalist, pop singer, and gifted songwriter has brought memorable performances to global audiences: Los Angeles, San Diego, Houston, Dallas, Chicago, Boston, Washington D.C., New York , Miami and Atlanta stateside; internationally to countries including Amsterdam, and most uniquely Rwanda with the Christian humanitarian agency World Vision, whose mission is to provide clean water to every person everywhere they work by 2030. She’s performed at high-profile events, like The Trumpet Awards in 2018; at legendary venues like The New York Philharmonic; and she even played Young Ella in the Celebration of Ella Fitgerald.

Yet there’s another side to Wé McDonald, too, and it’s reflected in the art she makes when the whole world isn’t necessarily watching. McDonald is from Paterson, New Jersey, a town with many glories but far removed from the glamor of Los Angeles and the bright lights of Fifth Avenue in Manhattan. Paterson is working-class and intensely real, defiant but bedeviled by social problems, grittily picturesque but not always easy to look at. “Head Up High,” Wé McDonald’s independently-released single, is a Paterson song, and she’s paired it with a video that’s thoroughly Paterson, too.

What does that mean? In part, it means that the song has its roots in the sort of music that Paterson artists have always produced: gospel, hardscrabble folk, rough-edged R&B. There are pop and jazz elements to McDonald’s vocal performance, but at the base, she’s singing the blues and making them contemporary – just like Nina Simone always did – and ready for the current young generation to enjoy. There’s plenty of Paterson in the song’s attitude, too. “Head Up High” is a clear-eyed song about keeping your balance when everything in the world seems to be conspiring against you. It’s not a decontextualized self-actualization anthem, it’s not a pep talk, and it’s not a song for the network executives. McDonald is singing about real challenges that city dwellers face – and she’s refusing to back down from any of them.

That defiance extends to the moving “Head Up High” clip – one that, again, shows aspects of Wé McDonald’s artistry that her mass audience might not be familiar with. In the video, she plays a woman in trouble, and none of that trouble is her doing. She faces an abusive boyfriend, a discriminatory police department, and the predatory hiring practices of an unethical workplace. Like way too many young African American women know, none of this is fiction. By the end of the clip, McDonald is battered and bruised, but she’s still standing up, and her dignity and sense of self-possession are intact.