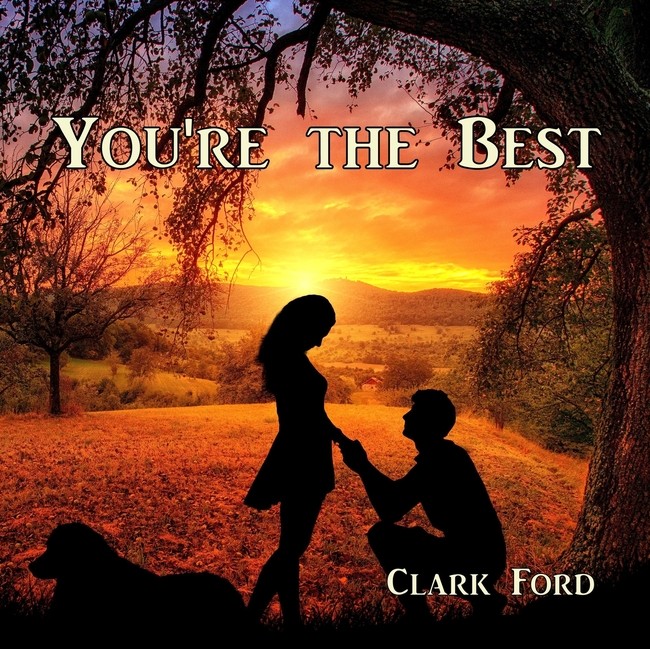 Although Clark Ford describes himself as a kind of Johnny-come-lately with country music, he’s nevertheless recorded one fine country music album with You’re The Best. The album includes a healthy fifteen-song portion of music. There’s more variety than you might expect, too. While the sound is consistent, the lyrical variety on it is quite vast.

For instance, there is a nice Christmas song, titled “My Mrs. Claus.” It’s actually a sweet love song, only put into holiday terminology. What woman can resist a saint that also wants to call her his Mrs. Claus? It’s tough offer to refuse. It’s sung with a gentle tone that may remind you of multiple John Denver hit songs from the 70s. In content contrast, though, is “America I Miss You.” Written in 2017, it’s like a goodbye letter to a nation. In it, the vocalist expresses how much he loves America, yet misses the way America used to be. This one was, most likely, inspired by then president, Donald Trump. One wonders what kind of song Ford might write about America today.

On a lighter note, “A Hangry Man” features a female vocalist. Its title combines the words ‘hungry’ and ‘angry,’ to describe how men (and be honest, women, too) oftentimes behave badly whenever they haven’t had enough to eat. Couples should never shop for groceries or discuss serious subjects on empty stomachs. It doesn’t take a marriage counselor to realize this simple truth.

The album’s title track is sung as a male/female duet. It’s a straight up love song and speaks of finding a lover like no other. Simply put, this person is the best. It’s wise, once a person finds someone they describe as ‘the best,’ to stick with them. The narrators in this song have certainly found the exact best fit for each other. However, sometimes honesty is the best policy. Our partner may view us as the best, but as “I’m Not Superman” explains, guys aren’t ever superman. They don’t have Xray vision, and they can’t stop speeding bullets. Sometimes, women need to lower our expectations just a tad. There’s only one Superman, and he’s a fictitious character in comic books and superhero movies.

Although this extensive album reveals Ford’s artistic ambitions, he opens it with what can only be termed a lazy song. “I Don’t Want To Work Today” expresses what we all feel some days — and some of us, every day. With an arrangement that incorporates a nice mandolin accompaniment, the vocalist sings about how he wants to sleep in, watch TV and basically just lay around. Americans probably work harder than most people in the world, and all our work can burn us out. Who doesn’t want to escape now and again? When I was in college, I rode a bus to school. This was a bus that went all the way to the beach. I can’t count the number of times I wanted to just skip my school stop and ride that baby all the way to the coastline. I never did, but I certainly understand the vocalist’s temptation. Maybe we can only live out this fantasy in song. Unless we’re brave enough to actually play hooky from our responsibilities. Ultimately, Clark Ford gives us much to ponder with his new album.