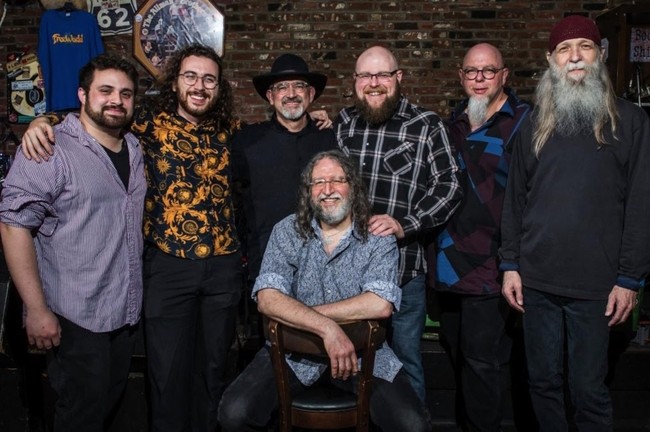 There’s a good case to be made that there’s no city more important to the development of popular music than Memphis, Tennessee. It’s the home of the king of Rock and Roll, one of the cradles of the blues, the gateway to the Dirty South, and the birthplace of dozens of influential rappers and rap styles. Soul, R&B, gospel, funk, jazz, rockabilly, psychedelia: name an American musical style, and you can be sure that they’re doing it in Memphis, and doing it well. And the many talented artists in Memphis are fiercely – and justifiably – proud of this. They know they’re carriers of tradition, and they take that role seriously.

Richard Cushing is a musician like that. He’s Memphis to the core: traditional but always creative, soulful, spiritual, imaginative, and welcoming. FreeWorld, his band, is part of the city’s streetscape, literally: they can boast about a Brass Note on the Beale Street Walk of Fame. They’ve toured the country, shared stages with Levon Helm, Bootsy Collins, Widespread Panic, Derek Trucks, and many other notables, and vigorously flown the flag for Memphis music in all its glorious shapes and forms. FreeWorld, like Memphis itself, is an amalgam of influences and approaches and a seamless harmonization of components that don’t, at first glance, seem to go together. Diversity is their strength, and they’re not shy about saying so.

“D-Up (Here’s To Diversity),” an anthem written on behalf of cross-cultural cooperation that doubles as a love note to Memphis, has been a cornerstone of the FreeWorld repertoire for more than two decades. The track kicks off Live From Memphis, a fiery 2003 concert set that firmly establishes the group as formidable musicians and dedicated party-starters. For 2021, Cushing and the band have thrown open the doors to the club and reimagined their signature song as a collective effort. More than thirty of Memphis’ best-loved musicians take turns playing and singing lines of “D-Up,” pledging their allegiance to their city and to the diversity and creativity that has always made Memphis music singular. The Godfather of Memphis rap, Al Kapone, soul singer-songwriter Hope Clayburn, Tierinii Jackson and Ori Naftaly from the Blues Music Award winning band Southern Avenue, internationally acclaimed vocal powerhouse Wendy Moten, the queen of Memphis jazz vocalists, Joyce Cobb, Grammy Award winning zydeco artist Terrance Simien and his daughter Marcella, slide guitar master Luther Dickinson from the North Mississippi Allstars, and many other Memphis notables are all featured on the track. They each contribute something that’s distinctively theirs but proudly part of the collective. It’s the musical equivalent of a group hug and a startling display of musical ability. Can one river city really contain this much talent?

Certainly, Memphis can, and the city has the creative infrastructure to support it: clubs, theatres, practice spaces, and studios. Several of the most famous recording studios in America are located in Memphis, and much of the “D-Up” clip captures these musicians hard at work in live rooms and vocal booths. But Cushing takes the camera to the street, too, and he shows us the Memphis he loves – its storefronts and statues to musicians, its bridges, and its boisterous crowds. He’s giving you Memphis in the raw – a place of celebration, unity, and mutual support, a great American city, united under one multicultural groove.