The hip-hop scene is blooming bigger and better than it ever has before. Partly this is due to the fact that technology and music-making apps make it easier than it’s ever been before and with that, it’s never been a better time for new voices to breakthrough and makes themselves known. A lot of Hip-Hop gets written off (unjustly so) as being mindless bragging and basic beats, but in truth, there’s a lot to be discussed as Hip-Hop as a form of the aesthetic building. 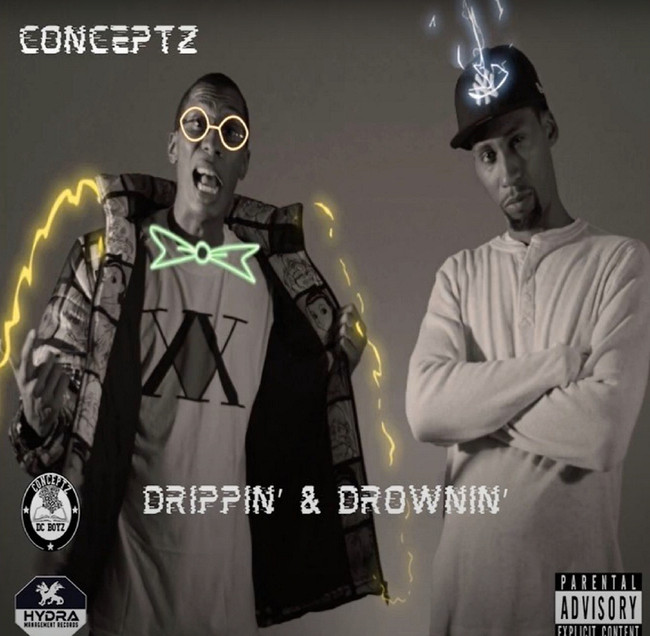 These are the mood pieces of modern times. Conceptz single “Drippin and Drownin” isn’t exactly breaking new ground as far as lyrical content. They’re not reinventing the wheel, but damn if they aren’t making it look damn good. This is the ideal song for when you’re trying to make a statement, and not even singularly. It’s a song that takes me back to times with friends raising hell, hyping each other up for a night out. The lyrics of course emphasize these feelings with details about various fits, accessories, and the mood that comes with decking yourself out. Fashion is so closely tethered to the Hip-Hop and Rap scene, that we’ve evolved and have always been past the cliche “tank top, blue jeans and timberlands” look that the media still tries to push. People like Kanye have broken through into mainstream fashion, setting new trends that aren’t just limited to rap fans, but high fashion fans. This is the musical equivalent of those sentiments.

The production is crisp and smooth. Conceptz has been around for over a decade now, and their work has been getting some well-deserved attention in the world of advertisement, sports, and collaboration with other artists and it makes perfect sense why. They have the beats and the slick modern production of today, but I highly recommend after listening to the normal version of the song to listen to the isolated vocals they’ve also supplied on Spotify. In that, you truly begin to get a sense of the skill these two hold especially lyrically and delivery-wise. It’s a mile a minute per the usual hyper-focused motor mouth that’s been tethered to rap from its inception, but it’s nevertheless impressive hearing Conceptz just absolutely murder the English language winding and weaving from word to word almost never giving you a minute to breathe that by the time you do, you’re just putting yourself back together you’re just so in awe of their skills.

The talent is undeniable, and Conceptz’s major focus is making music that holds up on its own against the constantly rising ranks of the new greats, and I have doubt that they will achieve that, but I would like to see them go beyond your more standard rap fare. They’re smart guys, and a good hype song is always appreciated, but I wanna see these guys dive in lyrically into more personal territory because if this is them at a more laid-back presentation, just imagine the work they’d do digging even deeper.