Jude Gwynaire’s single, “A Stroll Through Chelsea With Miss Magpie,” is a leisurely musical walk, built upon acoustic guitar lines. It also includes what sounds like keyboard orchestrations supporting it. It is only 3:22 long and is an instrumental without lyrics or singing. It is both folky and jazzy, at the same time. 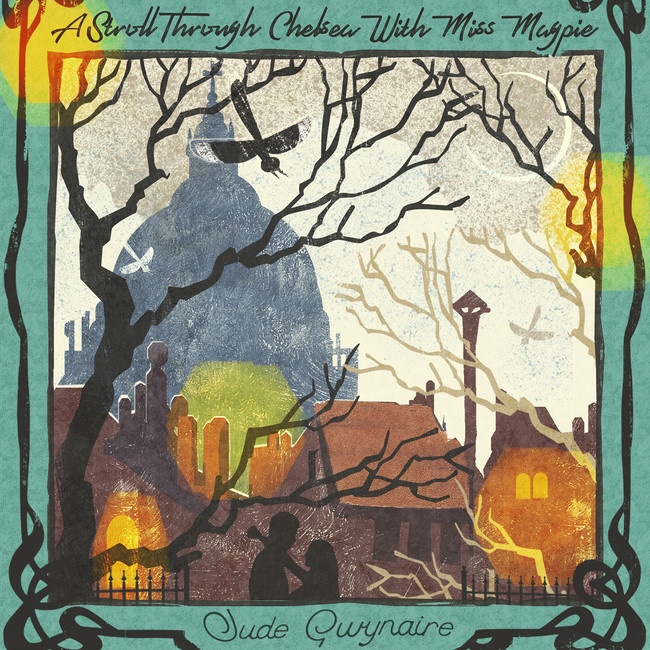 Miss Magpie is a character found in the first two seasons of Blinky Bill. She is an animated bird and described as an old fashioned and very proper teacher at Greenpatch school. On the program, Miss Magpie is many times the victim of Blinky’s misbehavior. However, it’s not clear if Gwynaire was actually inspired by this supporting character. The artwork for the single spotlights a romantic couple meeting together during what appears to be a cloudy afternoon, instead.

One imagines this Chelsea locale is an area of West London, which is part of inner London and often referred to as Central London. It is on the north bank of the River Thames. One possible inspiration for this tune, might be a couple’s romantic walk together. It’s fascinating how even the simplest of activities can become romantic when a couple has affection for one another. Walking, for most people, is a means to an end. It usually involves short distances, with motor vehicles or bikes taking people longer distances. The word “stroll” suggests travel without the destination in mind. It’s more about the togetherness and the nearness of one to another. It seems only distracted youth, relaxed elders and romantic couples are the ones that ever intentionally stroll. Well, one supposes some adults stroll through museums because people want to take their time and take it all in. No speed walking there, that’s for sure.

The pace of “A Stroll Through Chelsea With Miss Magpie” is also at a stroll’s pace. There are no drums, and only accenting bass parts. This is not a driven piece of music. Rather, it’s a lightly drifting collection of guitar notes. Folk music is the best genre category for it, as one can imagine old timey lyrics written for it and sung to it.

The melody is repeated and again, with little variation. It is music intended to create a mood. This is also another one of Gwynaire’s guitar exercises that steers clear of typical rock guitar playing. It’s not metallic or bluesy. Instead, it is created with gentle, intricate picking that is intended to create a vibe, and then successfully does just that.

“A Stroll Through Chelsea With Miss Magpie” is another one of Jude Gwynaire’s little musical gems. It won’t blow you away, so much as it invites you into its quiet world. It is simple and pure. It may even make you feel romantic. If not romantic, at least warm. It is a sweet, sincere repeated melodic pattern that grows on you with each repeated play. Yes, there are possible storylines for the track’s inspiration, but it is also wide open for each listener’s own private interpretation. When you walk this way, you can walk any old way you like.