“Sunny Beach Street” has an unusual melodic structure. It almost sounds like traditional Chinese music in places. Then again, Jude Gwynaire is like a musical fugitive, always staying a few steps ahead of his listeners. You just never know where he’ll show up next. 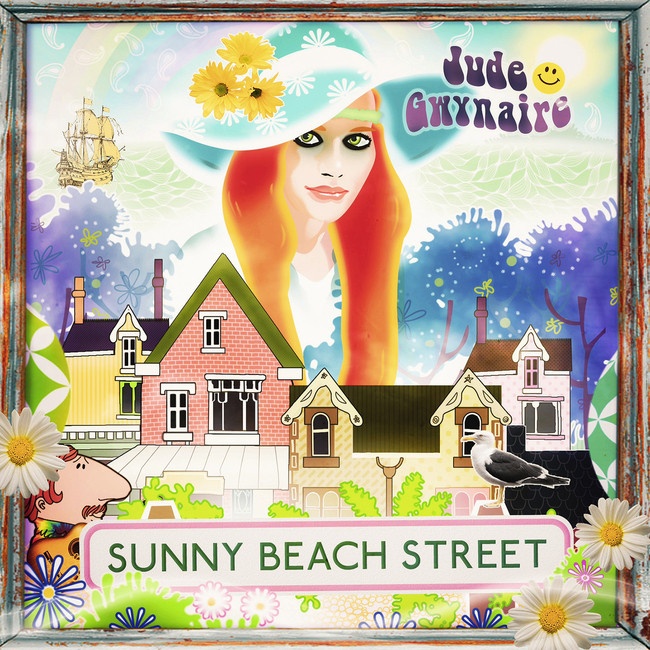 The picture accompanying this single is of a beautiful redhead hovering over an idyllic neighborhood. All the houses are colorful, all elements in the scene are eye-catching. It’s as though Sunny Beach Street is an address out of somebody’s utopian vision. It doesn’t really exist, although we imagine – on our best days – that it does. It’s almost like a rainbow-esque scene right out of the Teletubbies show, only more adult-like, less childish. Yet still just as colorful.

Gwynaire takes this recording at a slow, leisurely pace. It’s like the soundtrack to a walk in this magical neighborhood. There we are, walking our dog, umbrella spinning over our head while the sun shines down and warms our hearts and souls.

Electric guitar is the track’s primary instrument. It’s played more like a folk instrument, though, than a rock or blues device. The notes float more than they are plucked. It has a swirling, mystical quality, without completely veering into psychedelic territory. It sounds a bit like a Simon & Garfunkel song, before Simon created words and Garfunkel joined in to harmonize. In fact, is sounds like an answer to that S&G musical question, Are you going to Scarborough Fair? Clearly, the response to that query is an emphatic yes!

Structurally, this track is primarily non-linier. It does not follow a clearly marked roadmap of verses, choruses, verses. Rather, it meanders if you will, in a kind of dream state. It has no set destination, and just exists to be a beatific concoction of sound.

It’s a song that postulates what the world would be like without bad weather. There are no rainy days, let alone snowy ones, on “Sunny Beach Street.” There is no visual for a beach accompanying this single’s artwork. Perhaps this is because it’s an imaginary beach street. It’s a normal neighborhood lane, yet it feels like one is at a beach whenever visiting it.

Gwynaire shows great restraint while playing the guitars on this track. It must be difficult for skilled guitarists to hold back when every impulse cries out to just let her rip. Gwynaire does not ever ‘just let her rip,’ however. Instead, he takes it slow and easy, from start to finish. His intent, it would seem, is to create a mood, not a commotion. He wants to draw you into the world he’s created instrumentally and just get lost in it. He wants you to feel like you’re with him on “Sunny Beach Street,” even though you can’t see it with your eyes. No, he wants you to see it and appreciate it with your mind’s eye, instead.

Once again, Jude Gwynaire has given us good reason to follow his every move. Tracking his recorded career has become an adventure, full of unexpected twists and turns.