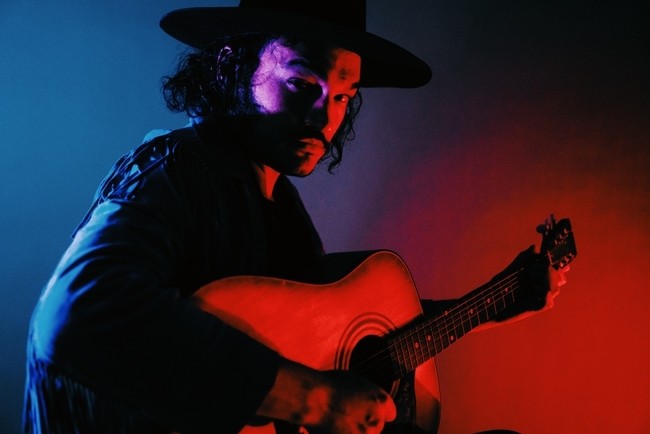 Night Beats, the Texas-born brainchild of Danny Lee Blackwell, are today announcing their fifth full-length Outlaw R&B and sharing the first single, “New Day.” Arriving following the Dan Auerbach-produced Myth of a Man LP (Heavenly Recordings) and the recent “That’s All You Got” 7′, Night Beats’ latest long-player lands May 7th via Fuzz Club Records. You can stream “New Day,” the first taste of the album –

Made during the height of the California wildfires (where Danny now resides), nationwide protests and a global lockdown, Outlaw R&B deals in a psychedelic and R&B-infused garage-rock sound that’s “bathed in post-apocalyptic bliss.” On the first single, Blackwell reflects: “‘New Day’ is my postcard from purgatory. Upon going into lockdown I holed myself up with Akira Kurosawa movies and canned goods. This is the result of sleepless nights while hearing the world crumble outside my window. I sing of desperation and loss, while grinning in the face of an uncertain future.”

“Outlaw R&B is music for the borderless, the free, the outcasts and the forgotten,” Danny continues, outlining the incoming album’s mission statement: “Through this medium you escape the confines of mental feudalism and bask in the euphoric glow of psychedelic R&B. The outlaw is the runner. Those whose minds aren’t sold by perfect pitch and clean fingernails. Take heed as each color coordinated minute of this record will induce temporary insanity. However, do enjoy the trip – just leave your coat and jacket at the door with Willie [Nelson] and position yourself near the bar, where [Isaac] Hayes runs the show.”

With four albums now behind them – their self-titled 2011 debut, 2013’s Sonic Bloom, 2016’s Who Sold My Generation and 2019’s Myth of A Man – Night Beats have garnered a reputation as one of the finest purveyors of contemporary rock’n’roll hedonism around. They’ve clocked up critical acclaim, toured across North and South America, Europe, Asia and South Africa and shared the stage with the likes of The Black Angels, Roky Erickson, The Jesus and Mary Chain, BRMC, The Zombies, Black Lips, Ty Segall and Thee Oh Sees, among many others.