Unless you’re a serious funk music aficionado, the name Felton Pilate may initially strike you as a relatively anonymous moniker. Dig deeper, however, and you’ll discover how Pilate was the lead singer of the popular band Con Funk Shun, which started way back in the mid-1970s, and recorded and performed throughout the 1980s. The group’s music will remind you of the Commodores, Earth, Wind & Fire and Chaka Khan, as well as other bass-heavy, dance-groove acts. Some of that act’s best-known jams included “Straight From The Heart,” “(Let Me Put) Love On Your Mind,” “Baby Got-The-Body” “All Up To You” and “Baby I’m Hooked (Right Into Your Love).” With this information in mind, Pilate’s latest single, “Waiting Just To Dance,” will hit you like just the sort of music you would expect Pilate to be creating these days. 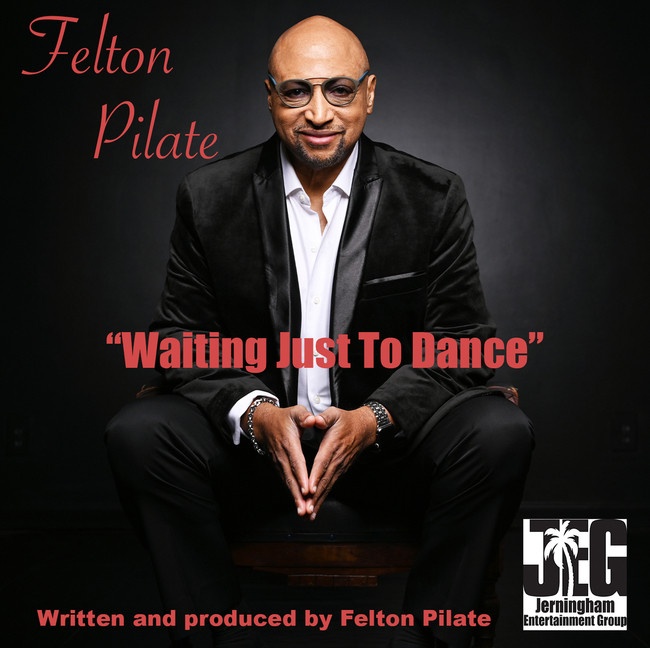 This grooving workout begins with a drum pattern that leads directly into a cool keyboard intro. Soon enough, a badass bass part takes the wheel and drives this dance jam straight across the dancefloor. These keyboards soon imitate brass horn sounds, while backing vocals ooh and ahh. Quickly, Pilate’s distinctive voice enters in. The overall initial impact is a song that nicely reminds you of Kool & the Gang’s “Lady’s Night” hit. Like that popular song, this track perfectly straddles the line between smooth soul and danceable funk.

Lyrically, Pilate sings about anticipation, which is his unstoppable desire to get out on the floor and dance. Its may very well be inspired by someone stuck in an office job, where business professional attire and behavior are strictly required. That person needs to earn a dollar so he/she can afford to hit the nightspots after an eight-hour workday. Patience is a virtue, they say. We tell our children they need to learn to wait patiently. However, sometimes what we instruct our children to do, is something we aren’t all too good at doing ourselves. Tom Petty wasn’t talking about his need to get down and get funky when he wrote about how the waiting is the hardest part, but his truism is truly universal. For those that deeply love to move their bodies to some fine, funky music, waiting is quite sincerely the hardest part.

As the song develops, however, it becomes increasingly clear how Pilate is talking about a collective, instead of an individual. “Everybody’s been waiting,” he acknowledges at one point. The opportunity to dance is described as a kind of group therapy if you will. Dancing can work out your frustrations, just as much as it can express celebration. Some people jog or walk each day to respond physically to their stressful circumstances, while others have dance as their exercise of choice.

Pilate sings this song with a sweet falsetto. He doesn’t want to watch TV or play solitaire. No, he wants to get his groove on at a club, and he also knows he’s not alone with his wish. “It just feels so right,” he exclaims. This is a healing balm powered by a bass line. Marvin Gaye once sang about sexual healing, but that is much more of a private medicine. Dance, however, is a more public way to doctor one’s self, and Felton Pilate is ready to provide that necessary auditory medicine.