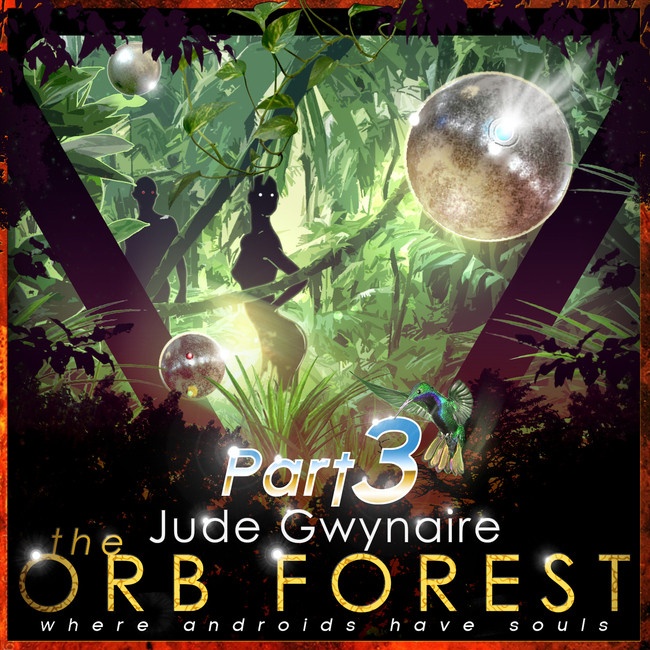 Skope: This single speculates about a place where androids have souls. What caused you to consider such a place?

Jude Gwynaire: I’m writing a sci-fi thriller called ‘The Orb Forest – Where Androids Have Souls’. Without giving too much away, the idea of androids having souls is a theme around which the book is based. I guess I’ve been influenced by futurist writers like Ray Kurzweil who wrote the non-fiction books: ‘The Age of Spiritual Machines’ and ‘Are We Spiritual Machines?’ If anything, my novel is a natural progression of his work in a sci-fi novel, with androids taking the lead roles.

Skope: The track doesn’t really have a beat, so how would you describe its style?

Gwynaire: It’s definitely meant to be an ambient composition – theme music for a particular scene in my novel. I don’t think any of the Orb Forest tracks will have a beat, they’ll all be ambient in some shape or form.

Skope: This track is, honestly, a little creepy. Was that intentional?

Gwynaire: Yes, Part 3 is meant to be a little unsettling. The music is part of a soundtrack to my book – music which could, in the future, be used for a film or TV series (one lives in hope!). Not all of the compositions will have this feel, some will just be dreamy, or, maybe, downright pleasant!

Skope: What’s the significance of the ‘Part 3’ in the video? Are there other parts and what are they like and how are they different?

Gwynaire: I’ve composed four parts already. Part 3 is one of the longer tracks. I thought it would make a good single release and serve as an introduction to the book. Parts 1 and 2 are almost as long, though part 4 only lasts about a minute or so.

Skope: What, exactly, is an orb forest?

Gwynaire: I can’t give too much away because the book isn’t finished yet; but hopefully the novel will be out in the near future, so all will be explained in the story!

Skope: How did you go about creating this track? What instrumentation was used?

Gwynaire: I used a Korg M50 workstation/synth to create all the Orb Forest tracks. It’s not my newest synth, but it seemed to suit the subject material very well.

Skope: When you created this music, did you also visualize it? If so, what did you see with your mind’s eye?

Gwynaire: Yes, I definitely visualized it. The scene in question is a particularly harrowing moment in the book. I can’t give too much away (isn’t it bad luck to talk about a book before it’s published?). However, all will be revealed on publication.

Skope: What can you tell me about the picture included in the YouTube video?

Gwynaire: It’s merely my artist friend’s representation of the music. He hasn’t read the novel yet, so the image largely came from his own imagination and my music.

Skope: The video’s picture reminds me of Adam & Eve, as both appear to be naked. Any relationship to the Biblical account in this visual?

Gwynaire: At this stage, the image is more of a representation of the unfinished novel. The couple are meant to be advanced androids, for sure.

Skope: When relating this track to a forest, did you have any particular forest or forests in mind?

Gwynaire: I live fairly near Rendlesham Forest in Suffolk (remember the famous 1980 UFO incident?). I’ve spent a lot of time there over the years, so that forest was definitely a big influence. It’s essentially a pine forest. Great place.