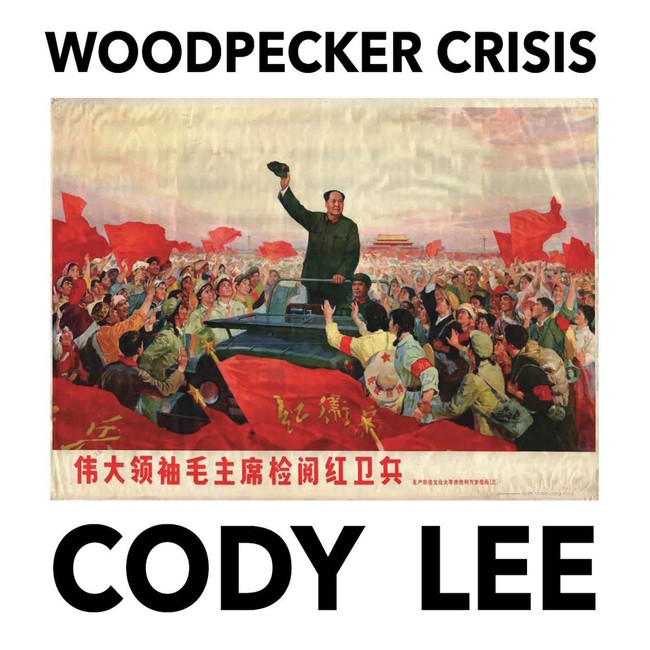 Cody Lee’s Woodpecker Crisis album is a good example of minimalist rock music. It’s the opposite, in many respects, to headphone music. Headphone music involves recordings where the mixes are busy – an everything but the kitchen sink approach – where sounds bounce back and forth, from right to left and left to right, creating a beautifully complicated listening experience. Such is not the case with Lee’s latest full-length, though. He’s an old school singer/songwriter, where everything centers around the song. Anything that doesn’t enhance the lyrics is unnecessary. Fortunately, Lee writes smart, memorable lyrics.

Lee is just as minimal with his song titles, as he is with instrumentation. No title here is more than two words, and the one that is (“Badthingshappen”) crams three words into one. Two of this album’s nine songs focus on familiar places. ”Nashville” describes that Tennessee where music career dreams (hopefully) come true. Another called “California,” highlights many of the most noteworthy aspects of the golden state. However, it doesn’t seem like Lee will be locating to California any time soon because he sings, “I wanna live in California/If it’s the last thing I do.”

Most of these songs are quiet and reflective. One exception is “Nobody.” It’s a rocking electric guitar track. On it, Lee announces how he doesn’t want anyone that doesn’t also want him. That may seem obvious. Nevertheless, there are plenty of people trying to make others like them, even those these others will never reciprocate. The guitars on this one, are wonderfully loud. The solo sounds a little like Mike Campbell adding axe work to one of Tom Petty’s early rockin’ rave-ups.

Lee closes the album with “Goodnight,” which is sung over an electric piano part. It has many of the earmarks of a 70s soft rock song. Unlike the rock of “Nobody,” “Goodnight” leans heavily toward the jazzy side of the musical spectrum.

“Drowning” is Lee at his angriest. It begins, straight to the point, with Lee stating: “It’s a fucked-up world/Every day.” The song’s title is Lee admitting how he’s drowning in a sea of hurt. Whether it’s politics, the health crisis or climate change, there are plenty of reasons to be mad at the world. Lee knows well how he’s not the only one drowning in negative emotions.

As a vocalist, Cody Lee is also a minimalist. He’s not one to hold notes for a long time or reach for especially high or low ranges. He’s much more of a conversationalist, where he comes off with a cynical observer. His songs are like a running commentary on what he sees and hears. It’s almost as though he’s giving us a news broadcast of his personal life.

It’s easy to like Cody Lee’s music, especially in our era of fake news. We can certainly use more people like Lee; ones not afraid to give us the truth and tell it like it is. You may want to think of Lee as a kind of musical Rod Serling. Serling, as you recall, introduced all those Twilight Zone episodes with clearheaded explanations. You’ll likely love these musical observations, if you can handle the truth.