Electric Peace’s “Dinah Might” has a title that sounds like, perhaps, an easy woman. That is, of course, until you say it out loud. It comes out as ‘dynamite.’ Then again, this word might also describe the very same woman. Whatever the case, this is rhythmic, rockin’ song. 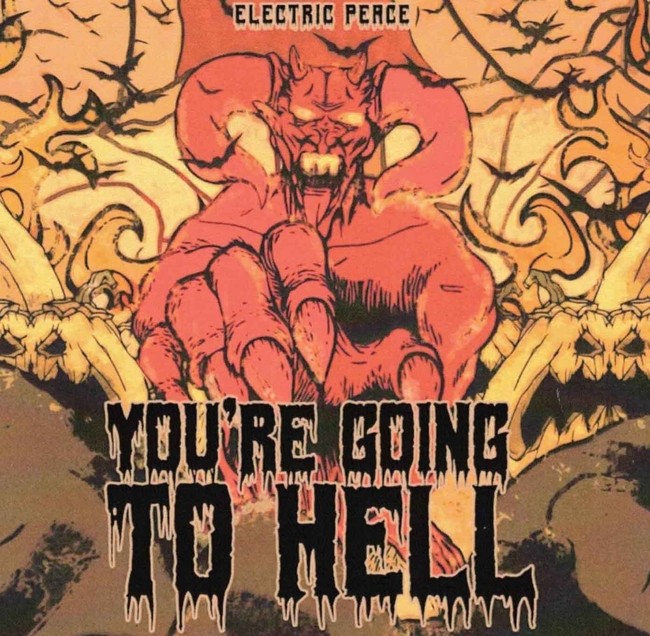 After opening with a guitar riff that sounds like it’s straight out of some Sixties shindig or other, drums and organ soon kick in. When Brian Kild begins to sing, it’s with a wavery voice. About a third of the way through, though, Kild’s voice changes. It becomes a little jazzier than rock & roll. It’s almost as though his personality shifts mid-song.

Kild has had quite the eventful life. He’s not ashamed to admit how he oncedid prison time in Norco Correctional Center with none other than Rick James. He also tells a story about stealing gas from Kurt Cobain’s car, back when the late Nirvana singer lived in Hollywood. That’s a couple of amazing celebrity encounters.

Kild’s band, Electric Peace, is by no means a new act. In fact, the group has been on the SoCal music scene since the Eighties. The group’s name sounds like something out of the late Sixties, though. With that said, however, the group isn’t some kind of woke pacifist act. Instead, the song “Dinah Might” is a raw piece of garage rock, at its best. “I’ll take you down with me,” Kild sings, sinisterly, “Misery loves company.”

It’s tough to figure out if the guy in this song is happy about his potential relationship or not. Usually, dynamite is a good thing. It’s about an explosive, exciting and memorable experience. Kild sings about how things are going to go his way. But how can things go his way, though, when misery loves company? Maybe this character is just a complicated, contradictory kind of guy. He has a lot of wants and needs, but much like Mick and the Rolling Stones, he can’t get no satisfaction.

This song character brags at the beginning of the track about having a case of dynamite. Is this how he describes his sexual tension? Sex is, after all, something truly explosive – if it’s done right. Then again, dynamite comes in sticks, which is an undeniable phallic symbol. There was a time when rock songwriters had to be this cagey with their lyrics. They couldn’t just come right out and sing about sex. That just wasn’t done in polite society. Now, during a time when much modern rock & roll music is borderline pornographic, Electric Peace is seemingly drawing analogies, rather than being blunt. It’s refreshing.

There’s a poster on the band’s Facebook page advertising a gig they played at the Music Machine in Los Angeles. They opened for The Flesh Eaters. Another opening act on that bill was Red Hot Chili Peppers. Fate is a strange thing, in how some bands become famous, while others pound the pavement for years without being recognized by the wider public. Electric Peace just hasn’t had a big break, despite its singer’s encounters with the likes of Rick James and Kurt Cobain. Nevertheless, the act doesn’t sound cynical. Instead, the music is still rowdy and cool, even after all these years.