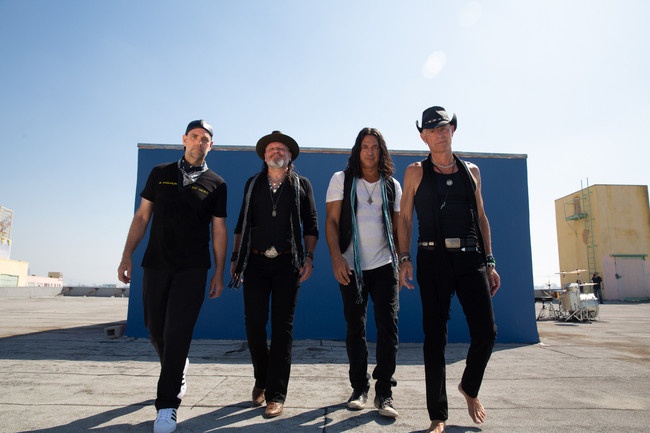 It’s not hard to pin a genre on a band like Slammin’ Gladys; it’s impossible. They grew up on the radio – early rock and life-changing Motown, and boy did they take notes. They draw from the best of popular music – the rocking-est, the moving-est, the catchiest. They landed a respectable hit and a deal with Priority Records in ’92 with “Down On Your Knees,” a hard-hitting ballad co-written with Warrant’s Jani Lane. Chemistry is chemistry, and it’s in short supply, so the foursome – vocalist/guitarist David Brooks, guitarist J.J. Farris, bassist Al Collins, and drummer Stephen DeBoard – reunited. They took their sweet time doing it, but if they needed a break that long to make a track this killer, no one’s complaining. “Dragon Eye Girl” is the first single off their new full-length, and there’s just no other word for it: it slams.

Ohio’s Jib Machine Records tracked the band down a few years ago, looking to re-release their self-titled debut record. That breathed new life into the beast, and “Dragon Eye Girl” was just the first of nine new songs the band cranked out. Brooks penned the track after meeting his girlfriend, who he noticed from onstage mid-set during a particularly rowdy performance. But the song took on a deeper meaning the more he thought about it. It’s all about how we all have a good side and a bad side, and maybe those dragon eyes are a warning sign. Because this tune snarls, stomps, and wails like a cornered animal. It’s blue-eyed soul with some serious swagger, a groove worthy of Prince, and riffs that Aerosmith wishes they’d written.

The band set up on a rooftop in LA just in time for the temps to hit 104, but really, what could be more perfect for a song like this? The band sweats it out as if there’s a crowd of hundreds throwing their fists in the air and singing along. These guys haven’t lost an ounce of steam since they last toured almost 25 years ago. It’s a gang-chorus that begs to be shouted from a rooftop: “Dragon Eye Girl shakin’ my soul / Where the heart goes / nobody knows / I’m not a weapon under your control…”. The Dragon Eye Girl herself makes an appearance throughout the clip, vamping for the camera, daring us to stare too long. To the younger bands out there pretending to rock and attempting to roll: this is how it’s done.