Thankfully, it’s finally time to close out this garbage-can year fraught with pandemic, police brutality and endless political drivel and, in doing so, what better way to sublimate our collective rage and flip the proverbial bird at 2020 than to put on a live-streamed NYE Rock Show? 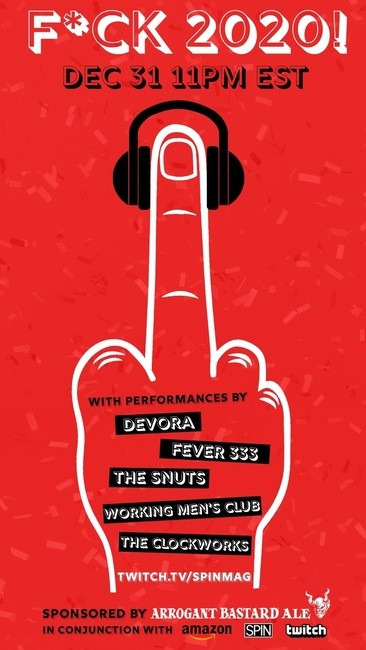 Announcing: F*CK 2020!, a live-streamed event to take place on December 31, 2020 @ 11:00p.m. EST via SPIN that will feature performances by DEVORA, Fever 333, The Snuts Working Men’s Club & The Clockworks. The event is sponsored by Arrogant Bastard Ale and is put on in conjuction with Amazon, SPIN Magazine & Twitch. The stream itself will be viewable on SPIN’s Twitch channel –

What promises to be an evening of dancing, cathartic F*CK YOU’s and general merriment, F*CK YOU 2020 aims to carry us all into a hopeful New Year with some riffs, a smirk, and above all, incredible live music. Hope you’ll join us!