The tides of musical fashion go in and out, but for surf-rockers, the big wave keeps rolling on. Surf rock might be the only style that’s just as cool now as it was when it was invented. For six decades, musicians have channeled the excitement of the waves, the feeling of liberation that the beach offers, and the sheer stakes of the surf lifestyle. Sometimes you ride on to victory; sometimes you wipe out. Either way, your pulse has quickened – you’ve taken your shot at glory, and you’ve got a story to tell back on shore. 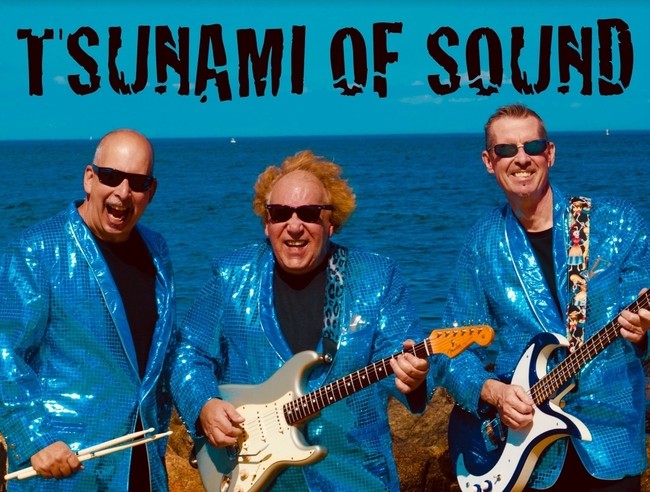 Tsunami Of Sound knows all about the thrills of surf rock. They’ve been masters of the style for a long time, and “Motor Oil,” their newest single, is designed to make a splash. Vibrant surf guitar, garage-floor grit, a thunderous beat, a rock-solid bass line, a mid-song breakdown followed by those “Wipeout”-inspired rolls, a near-psychedelic middle section: all of the elements are there. Naturally, there aren’t any vocals. These guys are purists – they know how it’s done.

“Motor Oil” is a standout cut on Permanent Wave, a wide-ranging, consistently energetic collection of first-rate surf-rock songs. Tsunami Of Sound surveys the entire history of surf-rock, tipping their caps to the Ventures and Link Wray as well as all instrumental music from the 1950s, ’60s, and ’70s, plus influence from ’60s garage and the British Invasion, and acknowledging the innovations of newer practitioners of the style like Los Straitjackets and Man Or Astroman. Through time, the objective for surf musicians has always been the same: get the instruments to slap like a great crashing wave and ride the band’s emotion and energy as best as you possibly can.

In the delirious animated clip that accompanies the single, the members of Tsunami Of Sound find themselves – and their stage – buoyed by the waves. But it’s not seawater they’re riding: it’s a great gush of motor oil, propelled from an infinite container by the errant footfall of a too-enthusiastic dancer. Before long, they’re out at sea, where they’re eaten in turn by a giant squid and a great blue whale. Through it all – and consistent with the ethos and aesthetic of surf-rock – they never break their cool. Also pretty cool are the sea creatures, gyrating ogres, greaser monsters, and winsome mermaids who get down to “Motor Oil.” Tsunami of Sound understands the necessity of cleaning our oceans and our world, so naturally, the oil spill is being cleaned up. Though the video is barely more than two minutes long, by the end, you’ll feel like you know them all.