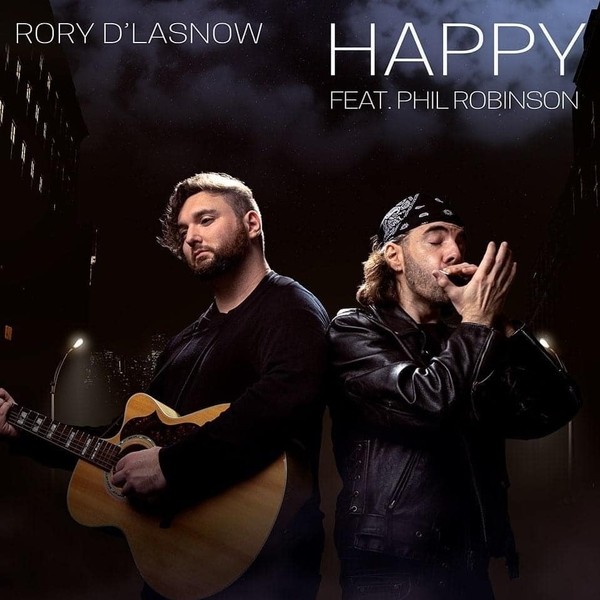 Rory D’Lasnow’s single “Happy” is a relatively simple, acoustic guitar-accompanied folky song. D’Lasnow is a New Jersey-based singer/songwriter that has built up a strong, loyal audience on the East Coast.

This particular song is notable for Phil Robinson’s strong presence. He adds vocal harmonies, and especially incorporates his harmonica stylings to the song, which give it a delightful folkish vibe. Robinson is also a singer/songwriter himself, centered in New York, which makes him a likeminded accompanist for D’Lasnow.

Lyrically, the song sometimes betrays its jaunty, upbeat sound, though. “Happy is someplace that I could be,” “D’Lasnow tells us at the song’s beginning, “but I was never destined to go.” Of course, such an assertion is a little overly dramatic. Happiness, after all is not like a destination, where once you arrive, you’re there for good. Rather, it’s more like a state of mind that we go in and out of, depending upon the circumstances of our life. Nevertheless, we still talk – as D’Lasnow does here – as though happiness is some place we can find on an emotional map, and then make it be our final destination. It’s easy to see why folks think and talk this way. Everybody wants to be happy, and nobody ever wants to be sad. However, life is filled with each emotional state (happiness and sadness), from the time we’re born, to the time we die.

Later in the song, D’Lasnow begins to reminisce about walking along a beach on a cold night with someone he loved. This, we’re to gather, was back when D’Lasnow would have described himself as happy. This, we’re also to assume, is a time in his life he’d like to return to, but never will. When he sings how this formerly loving couple will have to do without their yesterdays, it’s sung with more than a tinge of sadness. We can fondly recall happier times from our past, but we can never go back in time. Except, of course, by singing of those good times.

D’Lasnow also sings about how one day this other person will be just fine. One then supposes he’s singing about two unhappy people: himself, and this other one with whom he used to take walks on the beach. In other words, he foretells a happy ending for both.

So, while this song is sung passionately over a rhythmic acoustic guitar backing, it’s ultimately a sad lyrical recollection. In addition to Robinson’s harmonica and the track’s guitar, there is also piano running through the recording. There are no drums, though, which makes it especially unplugged.

Before the song ends, D’Lasnow says he and this other one will be alright. It’s not a joyful announcement, but it is at least hopeful concerning the future. Adults come to the realization that even the best of times don’t last forever. Mature people learn how to move on. Living in the past is dangerous. It’s a little like driving an automobile while looking in the rearview mirror the whole time. Eventually, you’ll run into an object in front of you because you’re too focused on what you’ve already passed. You get the sense this song is Rory D’Lasnow’s musical way of putting pivotal past events in his life behind him.