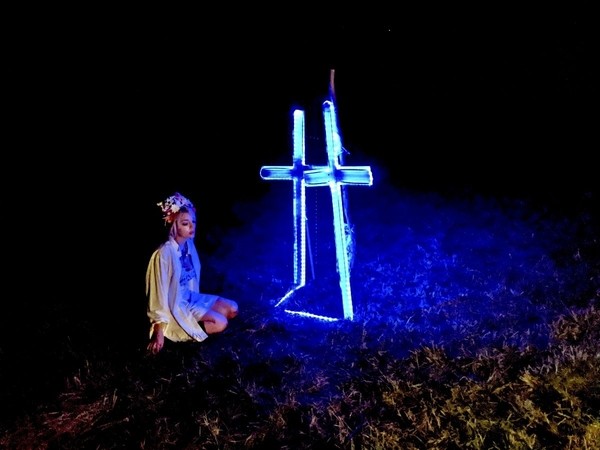 ‘Dancer’ continues her penchant for addressing societal power dynamics via dystopian storytelling, examining the nefarious methods via which cults arrest any expression of individuality. These themes, rooted in the abstract hinterland between fact and fiction, echo the electronic soundscapes that seem to blur between dimensions, and create an astral bed for Circe’s otherworldly vocals. This is also reflected in the accompanying video, directed by Circe and Rachel Povey. This depicts a slow, blurry march towards a neon cross, whose commanding light dominates, and washes out the scene, exerting an untold power over Circe.

As she elaborates herself:

“‘Dancer’ is a song that grew from a documentary I watched about The Source Family cult from California, examining a radical experiment in 1970’s utopian living. One of the young girls involved from the cult had a line in an interview about how she gave up all ownership of herself for the cult leader, ‘Father Yod’, even dancing.

That line always stuck with me – the thought someone could surrender their own movement and body – ultimate freedom. I waver on this dangerous line between interest and intrigue into cults, particularly the 60s-70s ones based around Hollywood. It’s always been a fascination for me that there is a surreal romance to these set-ups, in contrast to some horrific actions.”