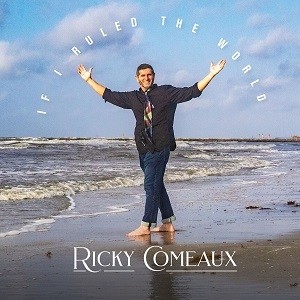 In an exotic amalgamation of strings that come ripping through the silence as though all life depended on the sharpness of its melody, Ricky Comeaux’s “Theme from Kiss of the Spider Woman” doesn’t dillydally about before getting right into the guts of its powerful elegance – it jumps right into the heat of battle and whisks us away in what could be one of the most eccentric tracks, I’ve reviewed off of a debut album this year. It’s not that there’s anything structurally or compositionally inferior about “Theme from Kiss of the Spider Woman,” but more that its most experimental of qualities gives it an innocent presence I’m not accustomed to hearing in the modern American underground – which is part of the reason it’s stuck with me as much as it has this fall.

There’s no point in trying to take the lyrics here at face value – from the obvious metaphorical nature of the verses, there’s a more profound level of intimacy lying just beneath the surface of Comeaux’s delivery of the words just waiting to reveal itself to us through the majesty of the instrumentation in the background. In this way, there’s never a moment that each element within the mix isn’t relying on another to extend the meaning of the song unto us as surreally as possible, and while some might say there are easier ways to go about making this single than the route the artist ultimately decided to take, I don’t think it would have been quite as provocative without the added labor involved.

From an instrumental perspective, the precision involved on Ricky Comeaux’s part in “Theme from Kiss of the Spider Woman” is downright surgical on more than one occasion, and I would even go so far as to say that it eclipses the importance of his vocal in a couple of critical spots here and there. He’s selflessly sharing the spotlight with an arrangement fit for a symphony orchestra in this track, and while he’s able to keep the pace without ever sounding winded, there’s not a doubt in my mind that he’s the kind of player who could move mountains if partnered with the right collaborators in or outside of the recording studio in future sessions.

“Theme from Kiss of the Spider Woman” is one of the shortest songs on If I Ruled the World but for all that it lacks in length it definitely makes up in aesthetical charisma of the most erudite quality. Ricky Comeaux has a lot to learn about his own artistry, but in this rookie release, he makes it known that he isn’t shy about trying to tap into every area of his sound he hasn’t already been able to. That kind of humble attitude is going to contribute to his ultimate success in the music industry, and even if there are a lot of other artists pursuing something a little more mass-marketable, his is a conveyance of song and self that doesn’t need to be commercialized to have a big effect on people.