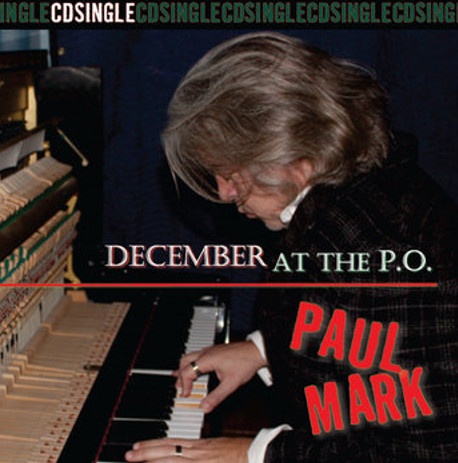 Paul Mark & The Van Dorens – “December At The P.O.” is a single for the holidays, culled from the latest album – Gravity, and even though I have heard this album it didn’t dawn on me that I would be reviewing the last track on the album by the end of 2020. “December At The P.O.” did make me think of the holidays when I first heard it, but the lyrics didn’t really set in until I had a chance to revisit it and found it ultimately satisfying as a stand out single on its own for the December occasion as it soon comes.

The music of Paul Mark is essentially American roots based, but Paul Mark himself is a singer/songwriter and piano player that combines crooning and playing in the same vein as the well-known greats, and he is an excellent band leader as well. The NY area artist and his band deliver a high–quality show with a great catalog of songs with a commanding musical and lyrical edge that cuts through the ears like a knife. But that is only a mild way to describe it, and “December At The P.O.” serves up its own purpose with its holiday spirit.

This track consists of a lone piano and vocal performance, likely recorded safely by himself during the pandemic, which started to happen at post release of the Gravity album, of which a video can be seen. I use both the audio and video to get the full visionary perspective whenever I can, and I appreciate being able to do that when it comes to performance clips because it shows the real side of any song, rather than featuring acting parts and that sort of approach to videos. Watching Paul Mark play is the next best thing to hearing him, which is not always the case with videos and that is probably why some prefer acting scenes.

The words of Paul Mark ring of a sadness often plaguing around the end of the year when the holidays come around and people reflect so much on what they have and not what others have, so it is a time to give and not expect to receive. The generosity alone is what matters, and Paul Mark has a gift to share and “December At The P.O.” is the ticket, it’s narrated with a sense of humor and grace the songwriter himself is always good for.

If you like classic piano and great storytelling, you will be moved by this artist and if “December At The P.O.” is your introduction to him, pick up the Gravity album and keep delving into his back catalog, because there is a lot more to go around and I’m glad to have this and other songs in my collection. It is not everyday that you run across such talent, but Paul Mark does have his audience and you never know where you’ll see him, but if you want to hear this fine artist, “December At The P.O.” is a great place to start.