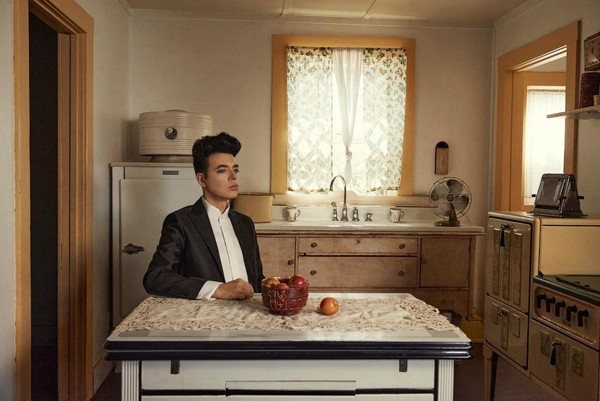 Los Angeles singer/songwriter Lawrence Rothman has announced their sophomore album available on January 29th via KRO Records. An album in two parts, it starts with Good Morning, America, a nine-song LP that includes guest’s legendary songwriter, singer and GRAMMY Award winner Lucinda Williams as well as Marissa Nadler, Mary Lattimore, Girlpool, Pino Palladino, and more (full tracklisting to be announced later). Not a Son follows and is a nine-track accompaniment to the LP featuring Lawrence’s emotive spoken word set to the backdrop of compelling and atmospheric instrumentals played by members of Thundercat’s band as Lawrence leads on piano, modular synth, and guitar. Recorded across the US in California, Missouri, and Tennessee, the work confronts America’s current climate. Trump’s destruction of democracy, the divided nation he’s fostered, and the isolation one feels living in such tumultuous and divisive times because of it. These themes are omnipresent in the first single “Decent Man” ft. Lucinda Williams where Rothman sings, “The New York Times says the country’s gone up for sale” with a Leonard Cohen-esque baritone and melancholy. Wiliams in the chorus singing ” Now we’re just a lifeless empty midwest mall the aftermath of a hot head playing god” (full lyrics at bottom of the PR). The video was filmed in VA at an undisclosed location and features deteriorating presidential statues that stand eight feet tall. The statues came from an actual Presidential Park that has since become abandoned.

For Rothman, who identifies as gender-fluid, Not a Son takes two meanings exploring alienation of personal identity and the alienation that has been amplified within the zeitgeist of the aforementioned administration. Both Good Morning, America, and Not A Son are produced by Lawrence and their collaborators Yves Rothman (Miya Folick, Yves Tumor, Bannofee) and Justin Raisen (Charli XCX, Angel Olsen, Sky Ferreira)