Philip Scott Poli has been active in the Toronto area music scene for many years as a tenor vocalist for the band The Fabulous Haircuts. However, ‘One Sky’ is Poli’s first solo album and what a fantastic One it is! Spanning a decade’s worth of creative thoughts & material, ‘One Sky’ digs deep and supplies rich substance that can be enjoyed my many. 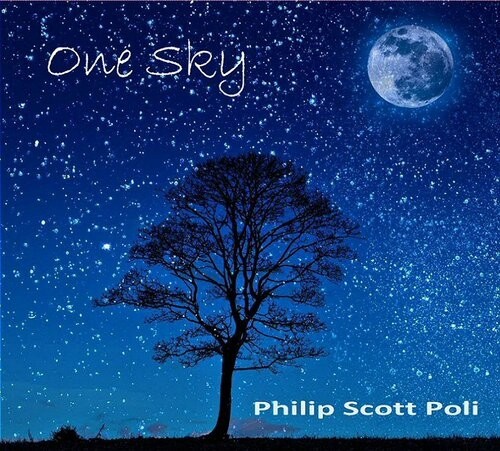 All songs, music & lyrics are composed by Philip Scott Poli with the exception of “I’m Right Here”, which was also co-writtten by Glen MacNeil. Poli is an award-winning songwriter and his latest release, ‘One Sky’ is extreme proof of that. With heavy elements of country and folk in place, this record has such an honest feel with Philip’s personal touch.

The album contains 10 wonderful songs and each composition tells a different story. We start up with the title track, “One Sky”, that has that classic country sound along with an inviting melody. “One Sky” is wide open and showers you with a phenomenal message that is so practical. Next, the listener will hear “Already Want You” that offers a warming sensation, so just sit back and soak in all of the goodness. Track three, “Give Me Away”, provides a musical & lyrical impact that packs a powerful punch! Up next, you will be wondering “Where Do All The Hit Songs Go” and Philip Scott Poli adds in a sweet ‘n’ subtle sentiment to the relatable theme. “Where Do All The Hit Songs Go” can best be summed up by saying missing songs are never forgotten and forever in our hearts and memory banks. The following song, “I’m Right Here”, includes a beautiful arrangement & orchestration with touching words, so “hold on tight”! Moving along, the listener will get hit with a catchy, fan-friendly style on “Dream Me Eagles” that is soaring high while landing inside your ears. Track seven, “Iron Into Gold”, showcases Philip Scott Poli delivering a spirited performance where the singer/songwriter is not holding back at all. “In My Father’s Heart” is heard next and what a consoling sound this songs gives off. “In My Father’s Heart” speaks volumes lyrically & vocally and is just emotional to the core. Track nine, “Shine”, is a song of renewal where there is a bright light at the end of the tunnel. What a strong finish for Philip Scott Poli where “The Story” speaks for itself with its heartfelt presence.

‘One Sky’ is one hell of an introduction into the next chapter of Philip Scott Poli’s solo career. This new path looks to be a very promising one for Philip as he seems to be heading in the right direction. With an array of excellent musicians and genuine sincerity on ‘One Sky’, this record is complete but the Philip Scott Poli story is far from over.