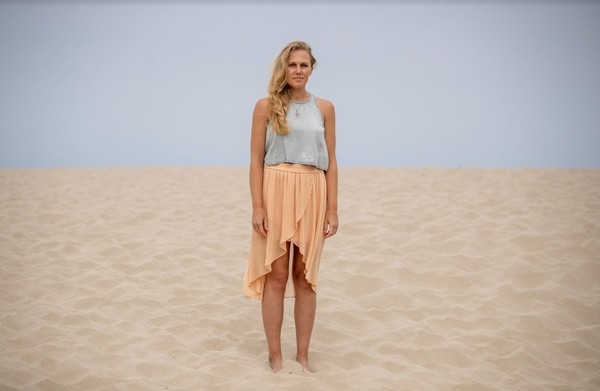 Spellbinding. That’s a powerful word, but it’s really the only one that suits the talented Lauren Hulbert. The Oakland, California singer-songwriter has been leaving audiences breathless for years, enchanting listeners with her warm, winsome, highly personal combination of folk, alternative country-rock, and atmospheric semi-acoustic pop. Her shows are subtly dazzling, her recordings are softly gorgeous, and her screen presence is positively luminous. Best of all, she does it in a manner that isn’t ostentatious in the slightest: Hulbert favors pure and unadorned folk arrangements that emphasize her thoughtful lyrics, her carefully-wrought melodies, and her radiant voice.

Perhaps it’s because she’s modest as she is, but there’s not much footage of Lauren Hulbert making magic on the Internet as there should be. The clip for “Gone In One” ought to change that. It’s Hulbert’s first proper music video, and it presents her as the low-key folk-pop star that she is: an object of desire and a true believer in the power of love and music as well as a strong guitarist and a deeply communicative storytelling singer. Consider it a teaser for Superbloom, her upcoming set, and one that seems sure to spread her voice and writing well beyond the Bay Area scene where she’s already cherished.

“Gone In One” builds on the aesthetic success of Beneath The Soil, the 2017 folk-pop project that established Lauren Hulbert as an artist with a distinctive sound and vision. Although it’s a more muscular track than anything on Soil– for one thing, Hulbert plays the rhythm track on an electric guitar – its confessional intensity and its poise will be immediately familiar to the artist’s fans. Her observational intelligence has sharpened, too, and the emotional specificity and plainspoken honesty of her verses have only been refined by time and practice.

That absolute candor extends to the clip for “Gone In One,” which is as fair a self-examination as viewers could want from an artist who has always been willing to speak frankly to her audience. The video follows Lauren Hulbert through condensed versions of three relationships, none of which is quite right for her – and one of which threatens her autonomy. Hulbert’s effortless charisma is apparent in every frame she’s in, and it’s easy to see why she’s such a site of interest. But when the video stops, she’s alone with her guitar on the same Oakland railroad tracks where she started, wiser from her experiences, self-possessed, and ready to face the future on her own terms.