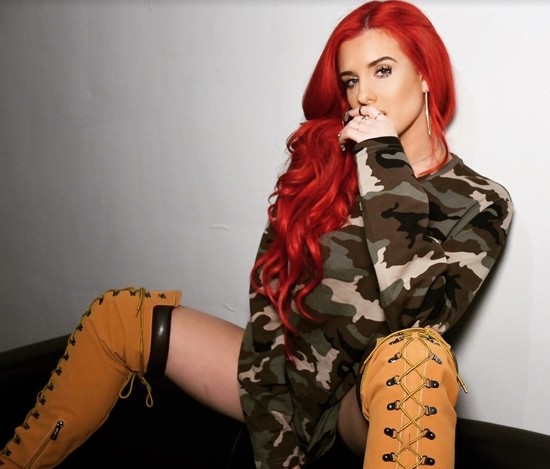 If you’re a pop fan, you’re extremely familiar with astronauts and aliens. They float through some of the most famous pages in the songbook: rocket men, extraterrestrials, space cadets of all sorts, entertaining us with outsized fantasies of wild exploration and experimentation. The starry void stands for unlimited possibilities, the sky a blank canvas on which we can inscribe our wildest desires. If an astral traveler from planet earth met a sexy alien, what kind of explosive chemistry might they have? Justina Valentine thinks she knows, and she’s ready to show you. Her clip for “Lucky You,” her latest single, is pure interstellar fantasia. It’s a green-screen assisted trip to a city where anything can happen – a place where any sailor of the stratosphere would be lucky to find himself.

And there’s one thing that’s guaranteed on any trip with Justina Valentine: fun. For years, she’s been delivering a good time wherever she goes. She dazzled on TV screens nationwide as a regular cast member of the hit MTV show Wild ‘N Out, and became an MTV fan favorite appearing on TRL, How Far is Tattoo Far, Revenge Prank & hosting reunions for the Challenge, Jersey Shore, & Ex on the Beach. She has left audiences breathless touring across the country and she’s delighted listeners with a run of provocative, catchy, and immediately appealing singles such as “Strawberry Soda” “Damn”, “Voicemail” & “Candy Land” (which featured Fetty Wap): these are some of the most magnetic, vibrant, irresistible hits to come from the Garden State in this era. Substream praised her for her “star power,” Indie Hip-Hop dubbed her a “rhyme slayer,” and millions of fans call her a favorite and a female to follow, no matter what crazy business she gets into.

“Lucky You” is a head-nodding beat, a chant, a teasing hook, and an “oh my God” exclamation that’s a pure eardrum-tickle. The track radiates charisma and kinetic energy. It all feels like a dare. A song like this one requires an accompanying dance, and in the “Lucky You” clip, Justina Valentine delivers with a routine that’s simultaneously sexy and approachable. The star takes on all of the social roles available in her planetary paradise – she’s an interstellar doctor, a traffic cop, a space chef, and a short-skirted lunar seductress. Her image is splashed on the gleaming towers of her spaceport, and she strides and struts across the balconies under a starry-black sky. She’s the uncharted territory, and the astronaut is the space wanderer – there to gaze in awe and wonder at the world she’s created.