The majority of people have not yet heard of hydrogen water. With the way research is advancing, chances are it won’t be long until you’re seeing it everywhere. The first questions most have is “What exactly is hydrogen water? Doesn’t water already contain hydrogen?” 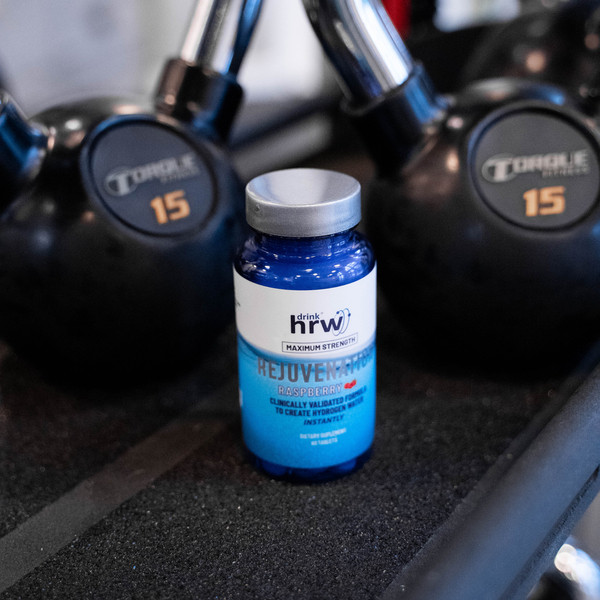 Simply put although tap water has hydrogen, that hydrogen is bound to the oxygen to make H2O and does not deliver any of the benefits molecular hydrogen has shown through research. With hydrogen water, hydrogen gas (H2) is dissolved into water. Clinical research has previously demonstrated that inhalation of hydrogen gas has therapeutic medical effects. Surprisingly, simply dissolving the gas in water and drinking it, known as hydrogen water, also provides many therapeutic effects as observed in the clinical studies. In fact, most clinical studies exploring molecular hydrogen’s therapeutic benefits have simply used hydrogen water, because it appears to often be more effective than inhalation, despite the far lower dose.

Now that it is established what hydrogen water is, why would you want to add hydrogen gas to your water? The answer is that research on this topic has exploded over the last 13 years, with 1500+ publications and close to 100 clinical trials demonstrating a therapeutic benefit of molecular hydrogen, with the most prominent results being when it’s dissolved in water.

It has recently been discovered that hydrogen therapy may have the potential to positively impact numerous factors that could put us at risk for COVID-19, such as compromised metabolic health and sleep deprivation; factors that are already some of the leading causes of shortening health span and progression of more serious diseases. In fact, one clinical trial has shown that hydrogen therapy may be effective for COVID-19 itself.

One commercial company in the hydrogen water space named “Drink HRW” is leading the way in honest messaging and the pursuit of high-quality clinical research. Drink HRW is working with researchers from 12 different Universities/Institutions around the world, with 6 published clinical trials and 2 case studies to date after only 4 years on the market. Their CEO Alex Tarnava claims they have an additional 15 more clinical trials at various stages, from recruiting to under peer review, as well as 4 preclinical research programs. When asked as to why researchers in the field are overwhelmingly turning to Drink HRW, he had this to say:

“At Drink HRW we deliver the highest dosage and concentration of hydrogen in water, instantly available anywhere in the world. We are committed to supporting research around the world to better understand this important and fascinating molecule. We work with researchers to search for the truth, believing strongly that the researchers, not private companies, should have the sole authority to design their studies and decide to publish results. We believe pursuit of the truth and integrity in research is the best path towards long-term growth.”

This type of response and attitude towards the pursuit of truth is one of the reasons why tarnava has been talked about and featured in articles posted in Forbes touching on the Art of Influence, and a feature in Forbes India which discussed hydrogen water and specifically Tarnava and Drink HRW.

One clinical trial was recently published demonstrating the Drink HRW tablets to be equivalent at raising alertness following 24hrs of sleep deprivation as compared to 100mg of caffeine, showing no side effects. The studies corresponding author Dr. Sergej Ostojic, M.D., Ph.D., professor in the department of Biomedical Sciences at the University of Novi Sad, Serbia,  and senior author of the Neurophysiology study said, “This preliminary non-inferiority trial allowed us to find that both caffeine and hydrogen-rich water acutely affected markers of alertness in young sleep-deprived men and women, with the effects similar between interventions. Nevertheless, it appears that HRW and caffeine had an impact on different domains of alertness; hydrogen improves orienting to sensory stimulation, while caffeine alters awareness and executive attention which refers to the ability to regulate responses in conflict situations. HRW perhaps galvanizes the orienting network in the brain that may play a role in various everyday circumstances that require directing of attention to a specific stimulus. HRW also displayed no undesirable effects after single-dose interventions and, therefore, might be suggested as a rather safe and effective alternative to caffeine for correction of the results of sleep deprivation.”

When asked to comment on the results of the study, Dr. Ismail Laher, professor in the department of Anesthesiology, Pharmacology and Therapeutics at the University of British Columbia and a distinguished sleep disturbance expert said, “Sleep deprivation poses a higher risk of high blood pressure, heart attack, obesity, diabetes and a weakened immune system. Importantly, sleep disturbances also lead to cognitive impairments and risks of motor vehicle accidents. Many people who are sleep deprived reach for a caffeinated product to stay alert. While a few cups of coffee are safe for most people, it is important to consider issues of caffeine addiction/withdrawal and the variable metabolism of caffeine in different people. Energy drinks and energy shots are also of concern, especially for children, adolescents and women who are pregnant or trying to get pregnant. Alternatives to caffeine that are shown to provide the same degree of alertness are promising but should be thoroughly tested for safety and efficacy.”

Interestingly, high-dose hydrogen water delivered through the Drink HRW tablets have shown to improve some of the very issues Prof. Laher describes sleep deprivation as being a risk factor for, with a double blind placebo controlled trial following 60 participants with metabolic syndrome for 24 weeks finding the high-dose hydrogen water intervention largely reversed the condition. This clinical trial followed a pilot trial of 12 participants in a double blind placebo controlled crossover design for 28 days that demonstrated high-dose hydrogen water from the Drink HRW tablets reduced liver fat, lowered the liver marker AST by 10%, and saw an 11% improvement in insulin sensitivity in just 28 days

So, does hydrogen water, or more accurately molecular hydrogen, come with side effects? As written by Drink HRW CEO Alex Tarnava after an extensive review, hydrogen therapy shows a very high safety profile with very few, and inconsistent, reports of any side effects in the clinical research.

It is important to note that the research is still early in development, and that much more clinical research in larger study groups is needed for any clear conclusions on absolute effectiveness for any indication or segment of the population. However, the early research for hydrogen water is showing to be quite compelling. When asked about plans to continue research on the topic of metabolic health and sleep deprivation, Tarnava had this to say: