In the midst of a protest, there are few things more powerful than a chorus of hope sung in unison by thousands of people. Songs of liberation have scored movements worldwide, invigorated marchers, given resistors a common point of reference, and, quite often, a catchy chorus to bring home. Jonathan Lykes is an activist and educator, as well as a talented musician, and he’s seen his share of street actions. He knows very well that an inspiring chorus will rally the crowd – and he’s decided to provide one of his own. 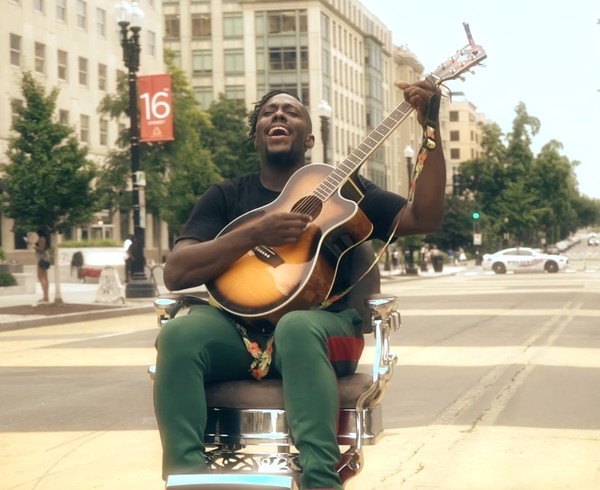 In keeping with the long tradition of topical and political songs from Fela Kuti to Guthrie to Nina Simone, Bob Dylan and Kendrick Lamar, “I Love Being Black” hides nothing. It’s a straightforward statement of self-affirmation with a chorus that’s absolutely upfront about its advocacy. Lykes wants his fellow Black and Brown comrades to celebrate their beauty and strength – and, by implication, realize the power they possess when they stand in solidarity. The singer-songwriter knows that too many Black people feel overwhelmed and devalued by present cultural and political conditions. “I Love Being Black” is not only about celebrating Blackness, but about responding to centuries of anti-black racism, the debasement of Black humanity and an indifference to Black suffering. Lykes is singing out in defiance, as boldly and bravely as he can, attempting to clean up the residue of a poisonous ideology.

“I Love Being Black” is just the latest extension of Lykes’ activism and organizing. He is a co-founder of Black Youth Project 100 and is the curator of The Black Joy Experience, the BYP100’s celebratory freedom song album meant to teach the value of holistic energy culture. He’s been a national youth organizer and policy analyst for the Get R.E.A.L. Initiative, a project designed to create opportunities for LBGTQ and gender-nonconforming people of color impacted by foster care, homelessness, and criminal (in)justice systems. He also co-founded a network called Keeping Ballroom Community Alive Network, which seeks to harness the power of the House|Ballroom community and apply it to social movements. In short, he’s a person accustomed to putting himself out on the line, so the arrangement he’s chosen for “I Love Being Black” should surprise nobody: it’s just Lykes’ voice, the voices of his friends and comrades in harmony, and a single acoustic guitar.

In the clip for “I Love Being Black” – which Lykes directed himself – he strums that acoustic six-string under the sun, right in the middle of Black Lives Matter Plaza in Washington, DC. His fellow activists stand beside him, some with signs, some just holding their ground in the capitol of a nation that continues to further criminalize Black and Brown bodies. They’ll fight for liberation if they have to, but they’d much rather have you join them in their struggle. And of course, they’re looking for a song to sing – one that encapsulates their hope for future generations and belief in who they are. Don’t be surprised if you hear “I Love Being Black” at the foreground of the #2020Uprising, or if you see Jonathan Lykes there, leading the chorus.