Pop-music-agitator Dorian Electra (pronouns: they/them/theirs) has returned with a double single and video for new tracks “Gentleman” and “M’Lady.” On the new singles, produced by Dylan Brady and Count Baldor, Will Vaughan, and Sega Bodega respectively, Dorian taps into the world of neckbeard subculture – a term used to describe internet-obsessed, basement-dwelling, socially isolated people, usually men – and attempts to tap into their psyche, both criticizing the toxicity with overt-masculinity and the female fantasy while still seeking to understand its roots. The visual counterpart, directed by Weston Allen and Dorian Electra, masterfully showcases and dissolves this dichotomy as Dorian presents themselves as both the sexualized fantasy feminine ideal and the archaic, chivalrous, neckbeard opposite the screen – armed quite literally with a sword, a pin-stripped fedora, gaming controller, and a seemingly never-ending flow of Mountain Dew. 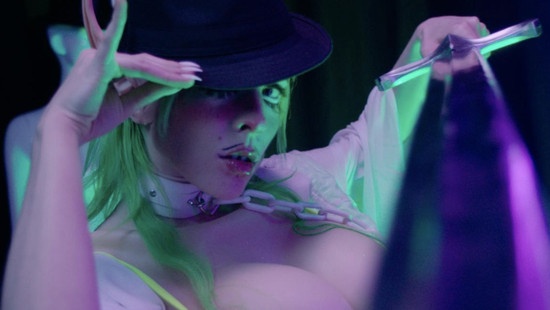 In May, Dorian set the stage for their upcoming project, out this Fall and titled My Agenda, with the release of their single “Sorry Bro (I Love You),” which tackles the ambiguity of friendship and homoeroticism. “Give Great Thanks,” released last month, continued to unveil this new era in the form of a digital scavenger hunt that took place across the globe, interweaving between the digital and physical world, leading fans to the reveal of the music video. Returning today with their double single, Dorian further presents this new project. The follow up to their 2019 debut Flamboyant, which Interview Magazine called “a pop magnum opus,” My Agenda explores a deeper, darker, and even more political side, with Dorian examining the ‘crisis in masculinity’ taking on topics rooted in alienation, internet trolls, incels, and the “manosphere.” Drawing together a masterful assortment of genres, including hardcore, metal, pop, dupstep, epic baroque and more, Dorian uses their music to explore the culture and aesthetics politicized around masculinity in order to better understand the current landscape, combat the culture of hate and reframe these aesthetics through a queer lens.