Sings Some Great Songs Pt.4 by Hughie Mac is another installment of a series of releases where he sings the greats with his own flair, never disgracing the originals in the process. Mac sings around the greater Philadelphia area in pubs, private parties, and senior centers. The authenticity of his voice is on the level with the greats he covers, and the 4th installment contains his level best, so it is also important to hear the previous releases. Many great tracks are covered with his own personal integral stamp on them, just as any effort to do so would be expected. 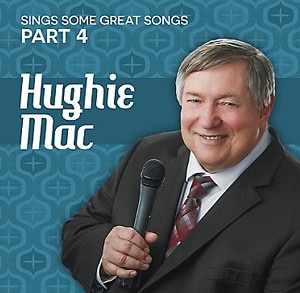 Coming from a background of family musicians, Mac is no newcomer he is just following his heart where these songs are concerned, as he probably does many of them live as well, but that is only a good guess. If you can picture pop standards done in more of a Frank Sinatra style, you can relate to Mac’s take on them. It kicks off with “Almost Like Being In Love,” which is a standard many know from the likes of Gene Kelley to Nat King Cole. This sets the mood up for the entire album, followed by great versions of “The Twelfth Of Never” and “All Of Me.”

By the time the fourth track sets in you’re comfortable with the choices and wanting to hear more once “Changes In Latitudes” by Jimmy Buffet does the business. Then things start to get a little more playful on “Two Pina Coladas” to keep the mood light. And things get a little predictable but also necessary when “My Way” comes into the picture with a most respectable version. It also depends on whether or–not you have heard his previous releases of his favorite classics, but it doesn’t seem to chronologically matter any because of his capabilities.

“Come Fly With Me” and “Fly Me To The Moon” keep the theme of flying together in a clever way, but then things change up with “me” being the theme of the two following tracks. “Let Me Be There” and “I Gotta Be Me” earn their respective back to back placement. And the rest of the collection gets more playful with fantastic versions of “My Kind Of Girl,” “Galveston” and “Gentle On My Mind.” This is where he hits the sweet spot before more fun ensues with some excellent versions of more standards to his credit which he deserves high marks for.

“The Glory Of Love” is also done very well, with some sublime piano playing featured. There really is not a negative word to say about this artist and his mission to bring classics to the people and keep them alive. “New York New York” was a must add to the collection, as it sticks closely to the original without copying the famous voice of the original. And then even more fun ensues with another Jimmy Buffet penned number, being “Cheeseburger In Paradise.” You cannot deny him on other any tracks as well, including “Nothing But The Best, “Young At Heart” and the 23 track disc closes with “Don’t Get Around Much Anymore.”