Gepe’s single, “Confia (Trust),” featuring Vicentico, begins with what sounds like traditional Latin acoustic guitar. However, what follows is a long way from traditional Latin music – especially visually. The video next opens a door into a four-piece band playing. Not just any four-piece, mind you, but four skeletons performing with rainbow-colored instruments. The band is partially traditional, with acoustic guitar, standup bass, and drums. However, this particular group also includes a DJ. These imaginary musicians are spied performing in a canyon, with snow-covered mountains surrounding them. Ah, but this is just the beginning. 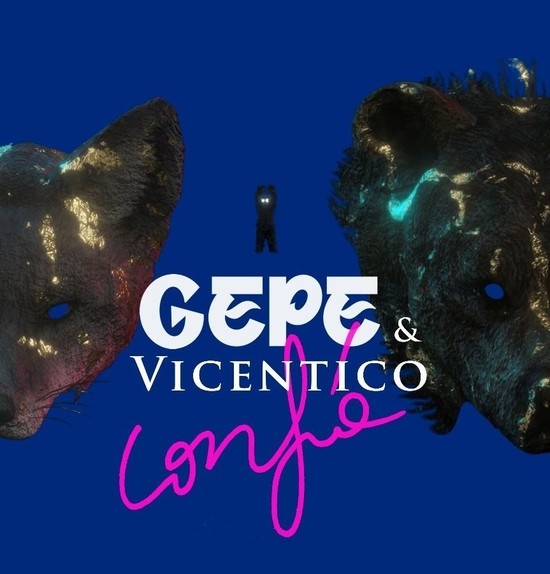 Soon these spooky players are replaced by costumed figures dancing in that same canyon. All are dressed head-to-toe in shiny and colorful outfits. The one upfront leading the pack, however, has a cat face. All the others are faceless. Cat face sings the lead vocal, while his shiny dance troupe dances along to the fairly traditional (sounding) music. This viewpoint switches to a perspective from a distant part of the canyon. It is then that the viewer can see a trail and a stream. Four great big balls made of various colors are then seen rolling like LGBTQ tumbleweeds across the stream and trail, while a few of our colorful dancers walk towards them.

Soon, two animal-headed figures are spotted fronting the skeleton band. One assumes these two are Gepe and Vicentico, but that’s only an educated guess. Eventually, our two leaders guide the skeleton band toward the river together. After that, the visual cuts to a troupe of seven colorful female dancers. These dancers are not in the canyon but are dancing in the middle of a tree-lined street. This scene then cuts to a bird-costumed figure dancing in a city square. Our bird is – you guessed it – a colorful one.

Next, one of the two lead singers are pictured singing in front of an old building. He’s backed not by female dancers or shiny costumed figures, but dancers dressed in beige ghost costumes. Then the video ups the ante by having that singer dance and sing in front of countless, differently colored figures. Next, the other singer – whose mask looks like a silver fox – is pictured in front of a mirror-y door that leads into the river, and soon all the colorful ones are heading to toward that river. Then, suddenly, the scene cuts to that same city street, only the dancers look more like Africans, with their dark bodies, and they’re not all young and beautiful – some are children and others appear to be out-of-shape adults.

Towards the video’s end, there is confetti falling from the sky onto singers and dancers, who appear to be back at a city square. All of this might make more sense if you speak Spanish. Even if you don’t, though, the song has a lovely lilting quality to it. This singing and playing is strikingly good. The visuals change so often, you’ll find yourself glued to the screen. Yes, you may not understand what you’re hearing and what you’re seeing, but I dare you to try and stop. You can’t. It’s that good.