Surreally bound to a hazy harmony in “Holding Will,” lush and full of color that translates into pure vitality in “Bardo Cons,” the string play afforded to most every track in Eric Anders’ and Mark O’Bitz’s collaborative album American Bardo is spellbinding and often as postmodern as any of the lyrical poetry in the record is. The guitars are absolutely the bedrock of the emotionality in this LP, but I wouldn’t say that they constitute the only reason to pick up the entire tracklist before the summer has come to an end. If you follow independent music, specifically in the realm of alternative folk and indie rock, this is a multidimensional piece you can’t afford to miss out on. 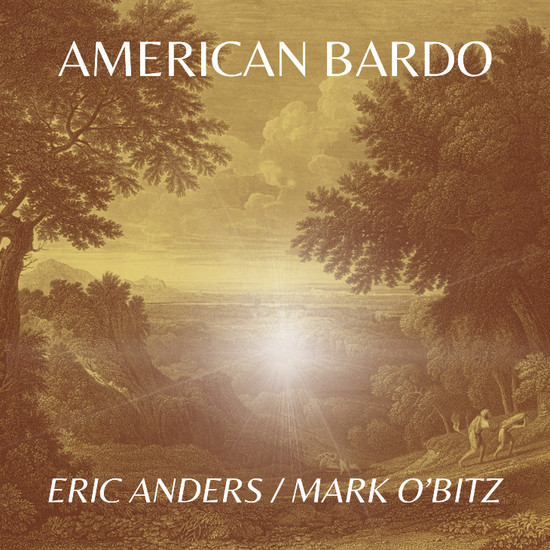 “My Love,” the smoky “And One Love,” “Haunting Abraham” and “A Home the I Can’t Know” are so aesthetically diverse in structure that I’m rather hesitant to describe any of them as being outright folk-rock, but this doesn’t mean I’d call American Bardo a scattered effort at all. On the contrary, if there’s anything we can learn about this pair from their ambitious songcraft, it’s that they aren’t willing to limit themselves in the studio just if it means accessing a larger share of a particular audience. That’s commendable, especially in the desperate times for the music business we’re seeing today.

I really like the overall production style in American Bardo, and personally I think that the crisp and physical approach to even the most modest of harmonies in “Judgement Day” and “Matterbloomlight (Revisited)” is essentially what makes this LP feel as achingly cinematic as it does around every one of its many twists and turns. Nothing sounds all that over the top or over-dramatized; if anything, there’s a minimalist component to the atmospheric melodicism just as much as there is a desire to remain untethered to trends in the American underground right now.

I would have liked just a touch more emphasis on the vocals in “Won’t Live It Down” and “Bury Me” than we ultimately received in this master mix, but only because of how brooding they are in both of these exquisitely-written songs. The singing here is probably the only directly underexploited element of note, but all in all, there’s no accusing Anders or O’Bitz of shortchanging us on intricacies – the best of which, mind you, would often be left on the sidelines by this pair’s slew of mainstream competitors.

If this is on par with what future collaborations between Eric Anders and Mark O’Bitz might potentially produce, I highly doubt this will be the last occasion on which they’re winning the hearts of critics and fans alike. American Bardo is every bit the extension of their ongoing musical relationship that longtime followers have likely hoped it would be, and though it’s stylistically the most heavily influenced by Americana, it doesn’t feel like a post-hipster pose by any means at all. Anders and O’Bitz have outdone themselves here, and I think you’re going to agree with me when you check out American Bardo for yourself.