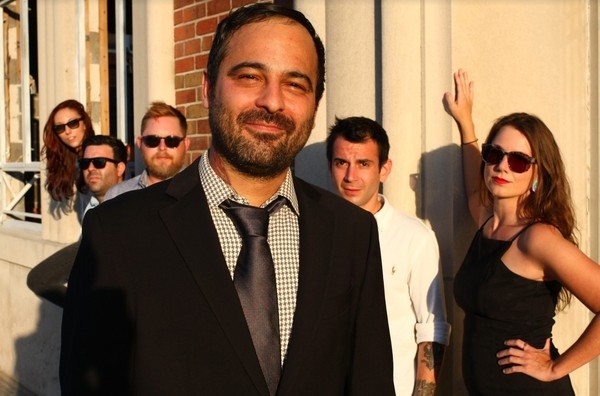 Is there a greater misnomer in all of Rockdom than Bubblegum Pop? Someone, somewhere, could’ve more accurately labeled such a livewire outlet for raw emotion, one that boasts some of music’s most life-changing, landscape-altering artists. Brandon Phillips and The Condition are not taking this elitist bullshit lying down. They are manning the barricades and lighting the signal fires for bubblegum-soul as if it were liberty itself, carrying on the noble tradition of Elvis Costello & The Attractions, The Supremes, Martha & The Vandellas, and do them all very proud. Brandon and brothers Adam and Zach formed BP&TC as a way to indulge their love of Motown and Sixties Pop in a way that didn’t feel quite right in their other bands, the Architects and the late Gadjits. Now, says Brandon, “we do it up right in as many ways as we can – the songs, the lineup, the clothes. It’s a whole thing.” “Sunrise” is the new single off the album of the same name, and the latest in the band’s monthly Summer Singles Series. And with its modern spin on that distinctively American sound, it’s a whole thing all by itself.

From the frenetic kickoff fill to its stop-start arena soul finish, “Sunrise” is all guts and glory set to a handclap rock ‘n soul swing. It’s one thing to sing a tune that celebrates the power of love, as Phillips does with his midwestern, two-pack-a-day, broken glass croon: “Love makes my sunrise now / Loves makes my ocean pound.” It’s another to write a song that sounds like love itself – the oohs and ahhs, that on-your-feet organ, the bravado of the verses, the transcendence of those choruses. In Phillips’ words, the track is about “being in a place of self-love and reflecting on the journey that got you there – a place where the sun rises and sets on love and happiness instead of your boss and your bank account.” The song beats with the heart of someone who’s had to sacrifice a whole lot to hang onto what matters most. And it sounds like if BP&TC had the chance, they’d do it all over again in, well, a heartbeat.

With a scorcher like “Sunrise,” why make a video? Why not make a movie? Phillips got it in his head to give the track the full black-and-white period piece treatment. The period? The late Sixties, of course. He threw in some dark humor, tripped-out criminal activity, and sweet, sweet revenge. And it’s all in service of the song’s uplifting message. He roped directors Todd Norris and Mitch Brian into shooting this tale of fed-up working stiffs hatching a Patty Hearst-style heist at their own bank. Pushed to the brink by a cigar-chomping Monopoly Mascot of a boss, they go full-on fried-out acid cult, emptying the vault just to incinerate the cash. It’s a twisted delight, watching that money burn. It’s also surprisingly inspiring. It’s nice knowing that all the stuff that keeps us from hanging a left at that major fork in life is just that – stuff. Good news: it burns. Even better news: someone wrote a killer song all about it.