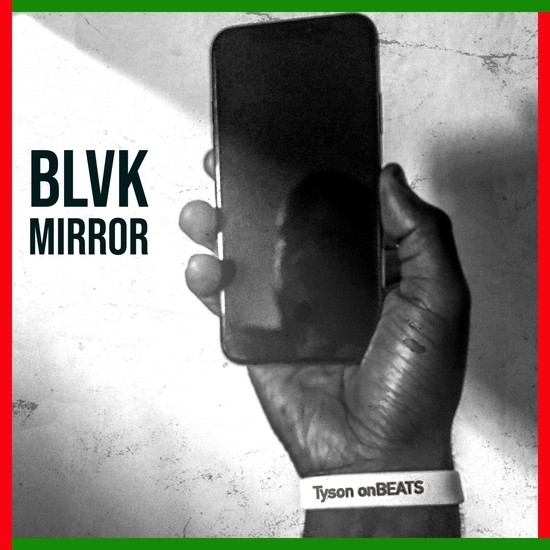 In the incisive second verse to “BLVK Mirror,” Bay Area rapper and author Tyson Amir asks us whether we’ve become completely unmoored by social media’s unforgiving demands. He pairs his flow with the the power of Fanatik onBEATS’ production and questions, do we only understand ourselves through likes and shares and digital avatars, he wonders, or can we create value of our own outside of a corporate-dominated system? The black mirrors in our pockets are habit-forming and addictive, but they’re also distractions, pulling activists away from revolutionary thinking – and revolutionary thinking, Tyson argues, is the only way we’re going to navigate these perilous times successfully. With consummate frankness, the rapper calls out peers more concerned with garnering attention than addressing our national crises. After the killing of George Floyd (and so many others), Tyson isn’t worried about inclusion in anybody’s Top Five.

He might make it on those lists anyway. Few rappers address American culture and politics with the intellectual clarity and force that he brings to every verse. Fewer still shares his deep understanding of history. His rhymes in “BLVK Mirror” namecheck world events and historical figures: American freedom-fighters and African heads of state, teachers, poets, and visionaries. “Dessalines,” which was released earlier this summer, is a tribute to the Founding Father and revolutionary leader of independent Haiti. Given his conceptual reach, it’s not surprising that he’s been successful as an educator and an entertainer. His books Black Boy Poems and the Black Boy Poems Curriculum are interventions in American history designed to address subjects too often overlooked – and do it in the language of hip-hop.

“BLVK Mirror,” however, is straight rhyme: two lean, mercilessly hard-hitting verses about the nation’s state and the technological threats to our freedom and our collective psyche. Not a word is wasted; not an image is misplaced; nothing breaks his flow or interrupts his passionate argument. The video matches the intensity of the song. Videographer Fanatik onBEATS captures footage of the new Covid-19 reality in the streets of Oakland, CA., the home base of Tyson onBEATS. Tyson Amir utilizes his video editing skills to highlight his lyrics with visuals and still images of newsworthy events and people, including those dispossessed and abused by the police, and others, like Malcolm X, whose revolutionary activities require no further elaboration. But for most of it, Tyson raps from behind the steering wheel of a car as he cruises through chilly, near-deserted Bay Area streets late at night. A more fitting metaphor for his poetry’s unswerving quality and his message would be hard to find.