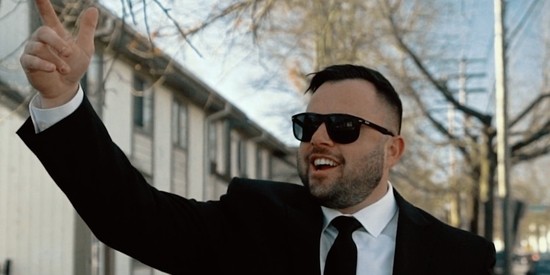 Hands up: who knew that Leonardo da Vinci was known not only for his art and inventions but for his dry, dark sense of humor? It’s true: Leo was the type who took everything seriously, except himself. Bridgeport, Connecticut’s daFinchi draws more than just inspiration for his name from the Renaissance master. His sing-song flow, laid-back vibe, and easy wit make his new full-length perfect for kicking it on the back porch or in the back alley. Case in point: daFinchi, aka The Renaissance Rapper, has a sleeper hit on his hands with his first single, “The Burbs.” It’s a catchy, tongue-in-cheek send-up of a city kid now living the good life on the right side of the tracks.

Don’t get it twisted, daFinchi is a huge fan of that ‘burbs life; he’s just in on the joke, too. He puts a Macklemore-ian spin on his newfound love of lawns, trees, birdsong, and peace on the streets. The title track off his debut album is a warm breeze of lazily strummed guitar, hazy reverb, and real drums, something you might hear wafting from the windows of a charming little colonial house with a basement practice space. According to our city boy, there’s lots to love way out in the sticks, like “the amenities / got no felonies / got no enemies.” It probably helps that he took a little bit of the hood with him, as he wraps that bar up with “got no legs cause the Ketamine’s kicking.” Produced by Fantom and released on the Cut Muzik label, “The Burbs” is a solid, memorable intro to an artist who has as much fun putting music out as you’ll have putting it on.

We’ll be honest: it looks like daFinchi has made a pretty smooth transition from the corner to the cul de sac. He fits right in among the clapboard homes lining row upon row of cozy side streets. Throughout the clip, directed by KDTV’s Frankie Fire, it’s clear that you can take the kid out of the city, but you can’t take the city out of the kid. daFinchi’s still draining 40s and freestyling outside the deli. But now the only gang he’s gotta worry about is the little league team from the next town over. It’s nothing but blue skies and backyards for our dog-walking, lawn-mowing, pie-eating-contest-winning (huh?!) hero. You know what’s cool about the suburbs? Nothing. And daFinchi is totally cool with that.